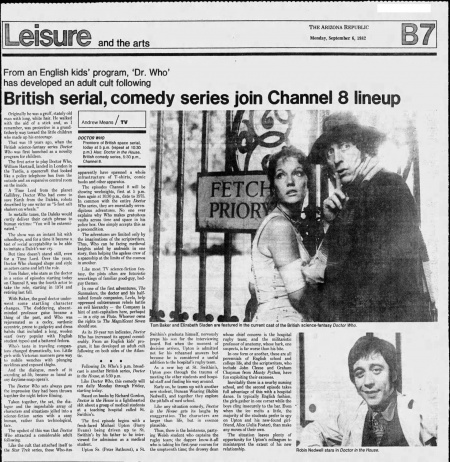 From an English kids' program, 'Dr. Who' has developed an adult cult following

Originally he was a gruff, stately old man with long, white hair. He walked with the aid of a stick and, as I remember, was protective in a grandfatherly way toward the little children who made up his entourage.

That was 19 years ago, when the British science-fantasy series Doctor Who was first launched as a novelty program for children.

The first actor to play Doctor Who, William Hartnell, landed in London in the Tardis, a spacecraft. that looked like a police telephone box from the outside and an expansive control room on the inside.

A Time Lord from the planet Gallifrey, Doctor Who had come to save Earth from the Daleks, robots described by one writer as "5-foot salt shakers on wheels."

In metallic tones, the Daleks would curtly deliver their catch phrase to human victims: "You will be exterminated."

The show was an instant hit with schoolboys, and for a time it became a test of social acceptability to be able to imitate a Dalek's war cry.

But. time doesn't stand still, even for a Time Lord. Over the years, Doctor Who changed shape and style as actors came and left the role.

Tom Baker, who stars as the doctor in a series of episodes starting today on Channel 8, was the fourth actor to take the role, starting in 1974 and retiring last fall.

With Baker, the good doctor underwent some startling character changes. The doddering, absentminded professor guise became a thing of the past, and Who was rejuvenated as a cocky, sardonic eccentric, prone to gadgetry and dress habits that included a long, woolen scarf (very popular with English student types) and a battered fedora.

And the dialogue, much of it sounding ad-lib, became as banal as any daytime soap opera's.

The Doctor Who sets always gave the impression they had been thrown together the night before filming.

Taken together, the set, the dialogue and the improbable array of characters and situations jelled into a science-fiction series with a zany human, rather than technological, face.

The upshot of this was that. Doctor Who attracted a considerable adult following.

Like the cult that attached itself to the Star 'Trek series, these Who-ites apparently have spawned a whole infrastructure of T-shirts, comic books and other apparatus.

The episodes Channel 8 will be showing weeknights, first at 5 p.m. then again at 10:30 p.m., date to 1975. In common with the entire Doctor Who series, they are essentially serendipitous adventures. No one ever explains why Who makes gratuitous vaults across time and space in his police box. One simply accepts this as a precondition.

The adventures are limited only by the imaginations of the scriptwriters. Thus, Who can he facing medieval knights aided by androids in one story, then helping the ageless crew of a spaceship at the limits of the cosmos in another.

Like most TV science-fiction fantasy, the plots often are futuristic reworkings of familiar good-guy, had-guy themes.

In one of the first adventures, The Sunmakers, the doctor and his half-naked female companion, Leela, help oppressed subterranean rebels battle an evil hierarchy — the Company (a hint of anti-capitalism here, perhaps) — in a city on Pluto. Whoever owns the rights to The Magnificent Seven should sue.

As its 19-year run indicates, Doctor Who has increased its appeal considerably. From an English kids' program, it has developed an adult. cult following on both sides of the Atlantic.

Caption: Tom Baker and Elisabeth Sladen are featured in the current cast of the British science-fantasy Doctor Who.