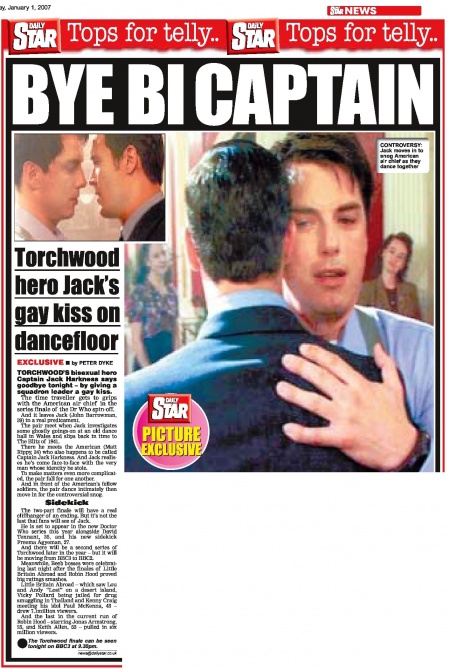 The time traveller gets to grips with the American air chief in the series finale of the Dr Who spin-off. And it leaves Jack (John Barrowman, 39) in a real predicament.

The pair meet when Jack investigates some ghostly goings-on at an old dance hall in Wales and slips back in time to The Blitz of 1941.

There he meets the American (Matt Rippy, 34) who also happens to be called Captain Jack Harkness. And Jack realises he's come face-to-face with the very man whose identity he stole.

To make matters even more complicated, the pair fall for one another.

And in front of the American's fellow soldiers, the pair dance intimately then move in for the controversial snog.

The two-part finale will have a real cliffhanger of an ending. But it's not the last that fans will see of Jack.

He is set to appear in the new Doctor Who series this year alongside David Tennant, 35, and his new sidekick Freema Agyeman, 27.

And there will be a second series of Torchwood later in the year — but it will be moving from BBC3 to BBC2.

And the last in the current run of Robin Hood — starring Jonas Armstrong, 25, and Keith Allen, 53 — pulled in six million viewers.

The Torchwood finale can be seen tonight on BBC3 at 9.30pm.

Caption: CONTROVERSY: Jack moves in to snog American air chief as they dance together