Calling Dr Who: It's time to fly! 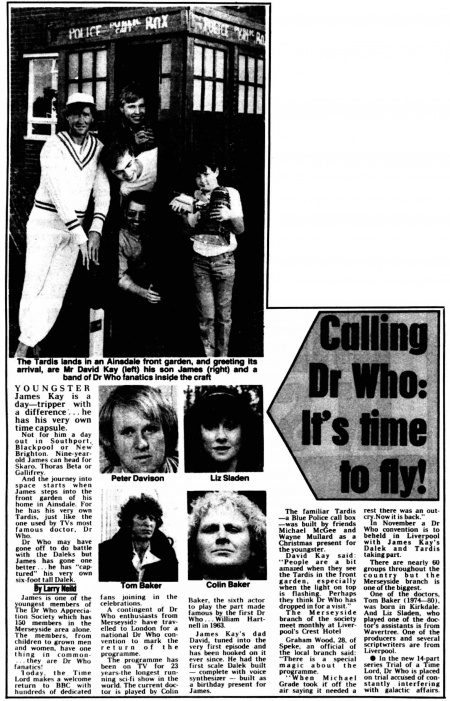 YOUNGSTER James Kay is a day—tripper with a difference'... he has his very own time capsule.

Not for him a day out in Southport, Blackpool or New Brighton. Nine-year-old James can head for Skaro, Thoras Beta or Gallifrey.

And the journey into space starts when James steps into the front garden of his home in Ainsdale. For he has his very own Tardis,just like the one used by TVs most famous doctor, Dr Who.

Dr Who may have gone off to do battle with the Daleks but James has gone one better ... he has "captured" his very own six-foot tall Dalek.

James is one of the youngest members of The Dr Who Appreciation Society which has 150 members in the Merseyside area alone. The members, from children to grown men and women, have one thing in common ... they are Dr Who fanatics!

Today, the Time Lord makes a welcome return to BBC with hundreds of dedicated fans joining in the celebrations.

A contingent of Dr Who enthusiasts from Merseyside have travelled to London for a national Dr Who convention to mark the return of the programme.

The programme has been on TV for 23 years-the longest running sci-fi show in the world. The current doctor is played by Colin Baker, the sixth actor to play the part made famous by the first Dr Who... William Hartnell in 1963.

James Kay's dad David, tuned into the very first episode and has been hooked on it ever since. He had the first scale Dalek built — complete with voice synthesizer -- built as a birthday present for James.

The familiar Tardis — a Blue Police call box — was built by friends Michael McGee and Wayne Mullard as a Christmas present for the youngster.

David Kay said: "People are a bit amazed when they see the Tardis in the front garden, especially when the light on top is flashing. Perhaps they think Dr Who has dropped in for a visit."

Graham Wood, 28, of Speke, an official of the local branch said: "There is a special magic about the programme.

"When Michael Grade took it off the air saying it needed a rest there was an out-cry. Now it is back."

In November a Dr Who convention is to beheld in Liverpool with James Kay's Dalek and Tardis taking part.

There are nearly 60 groups throughout the country but the Merseyside branch is one of the biggest.

One of the doctors, Tom Baker (1974-80), was born in Kirkdale. And Liz Sladen, who played one of the doctor's assistants is from Wavertree. One of the producers and several scriptwriters are from Liverpool.

In the new 14-part series Trial of a Time Lord, Dr Who is placed on trial accused of constantly interfering with galactic affairs.

Caption: The Tardis lands in an Ainsdale front garden, and greeting its arrival, are Mr David Kay (left) his son James (right) and a band of Dr Who fanatics onside the craft