Can Doctor Who Dec Ant? 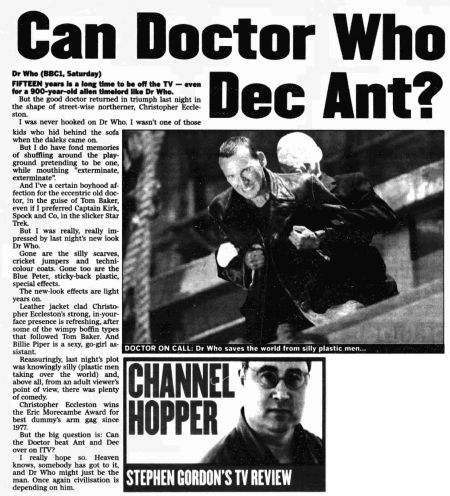 FIFTEEN years is a long time to be off the TV — even for a 900-year-old alien timelord like Dr Who.

But the good doctor returned in triumph last night in the shape of street-wise northerner, Christopher Eccleston.

I was never hooked on Dr Who. I wasn't one of those kids who hid behind the sofa when the daleks came on.

But I do have fond memories of shuffling around the playground pretending to be one, while mouthing "exterminate, exterminate".

And I've a certain boyhood affection for the eccentric old doctor, in the guise of Tom Baker, even if I preferred Captain Kirk, Spock and Co, in the slicker Star Trek

But I was really, really impressed by last night's new look Dr Who.

Gone are the silly scarves, cricket jumpers and technicolour coats. Gone too are the Blue Peter, sticky-back plastic, special effects.

The new-look effects are light years on.

Leather jacket clad Christopher Eccleston's strong, in-your-face presence is refreshing, after some of the wimpy boffin types that followed Tom Baker. And Billie Piper is a sexy, go-girl assistant.

Reassuringly, last night's plot was knowingly silly (plastic men taking over the world) and, above all, from an adult viewer's point of view, there was plenty of comedy.

But the big question is: Can the Doctor beat Ant and Dec over on ITV?

I really hope so. Heaven knows, somebody has got to it, and Dr Who might just be the man. Once again civilisation is depending on him.

Caption: DOCTOR ON CALL: Dr Who saves the world from silly plastic men...