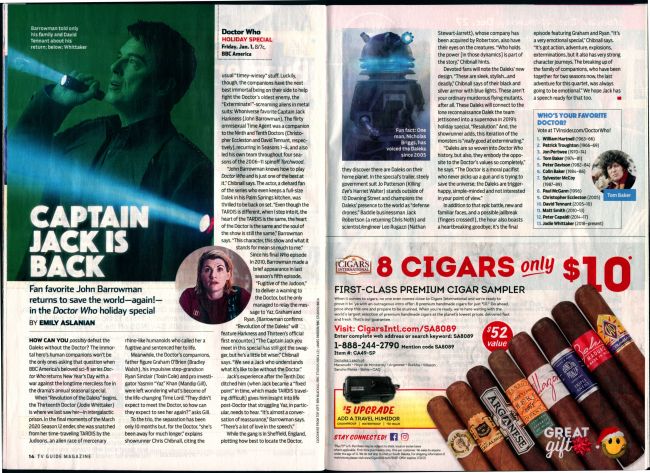 Fan favorite John Barrowman returns to save the world—again!—in the Doctor Who holiday special

HOW CAN YOU possibly defeat the Daleks without the Doctor? The immortal hero's human companions won't be the only ones asking that question when BBC America's beloved sci-fi series Doctor Who returns New Year's Day with a war against the longtime merciless foe in the drama's annual seasonal special.

When "Revolution of the Daleks" begins, the Thirteenth Doctor (Jodie Whittaker) is where we last saw her—in intergalactic prison. In the final moments of the March 2020 Season 12 ender, she was snatched from her time-traveling TARDIS by the Judoons, an alien race of mercenary rhino-like humanoids who called her a fugitive and sentenced her to life.

To the trio, the separation has been only 10 months but, for the Doctor, "she's been away for much longer," explains showrunner Chris Chibnall, citing the usual "timey-wimey" stuff. Luckily, though, the companions have the next best immortal being on their side to help fight the Doctor's oldest enemy, the "Exterminate!"-screaming aliens in metal suits: Whoniverse favorite Captain Jack Harkness (John Barrowman). The flirty omnisexual Time Agent was a companion to the Ninth and Tenth Doctors (Christopher Eccleston and David Tennant, respectively), recurring in Seasons 1-4, and also led his own team throughout four seasons of the 2006-11 spinoff Torchwood.

"John Barrowman knows how to play Doctor Who and is just one of the best at it," Chibnall says. The actor, a diehard fan of the series who even keeps a full-size Dalek in his Palm Springs kitchen, was thrilled to be back on set. "Even though the TARDIS is different, when I step into it, the heart of the TARDIS is the same, the heart of the Doctor is the same and the soul of the show is still the same," Barrowman says. "This character, this show and what it stands for mean so much to me."

Since his final Who episode in 2010, Barrowman made a brief appearance in last season's fifth episode, "Fugitive of the Judoon," to deliver a warning to the Doctor, but he only managed to relay the message to Yaz, Graham and Ryan. (Barrowman confirms "Revolution of the Daleks" will feature Harkness and Thirteen's official first encounter.) "The Captain Jack you meet in this special has still got the swagger, but he's a little bit wiser," Chibnall says. "We see a Jack who understands what it's like to be without the Doctor."

Jack's experience after the Tenth Doc ditched him (when Jack became a "fixed point" in time, which made TARDIS traveling difficult) gives him insight into life post-Doctor that struggling Yaz, in particular, needs to hear. "It's almost a conversation of reassurance," Barrowman says. "There's a lot of love in the speech."

While the gang is in Sheffield, England, plotting how best to locate the Doctor, they discover there are Daleks on their home planet. In the special's trailer, steely government suit Jo Patterson (Killing Eve's Harriet Walter) stands outside of 10 Downing Street and champions the Daleks' presence to the world as "defense drones." Baddie businessman Jack Robertson (a returning Chris Noth) and scientist/engineer Leo Rugazzi (Nathan Stewart-Jarrett), whose company has been acquired by Robertson, also have their eyes on the creatures. "Who holds the power [in those dynamics] is part of the story," Chibnall hints.

Devoted fans will note the Daleks' new design. "These are sleek, stylish...and deadly," Chibnall says of their black and silver armor with blue lights. These aren't your ordinary murderous flying mutants, after all. These Daleks will connect to the lone reconnaissance Dalek the team jettisoned into a supernova in 2019's holiday special, "Resolution." And, the showrunner adds, this iteration of the monsters is "really good at exterminating."

"Daleks are so woven into Doctor Who history, but also, they embody the opposite to the Doctor's values so completely," he says. "The Doctor is a moral pacifist who never picks up a gun and is trying to save the universe; the Daleks are trigger-happy, simple-minded and not interested in your point of view."

In addition to that epic battle, new and familiar faces, and a possible jailbreak (fingers crossed!), the hour also boasts a heartbreaking goodbye; it's the final episode featuring Graham and Ryan. "It's a very emotional special," Chibnall says. "It's got action, adventure, explosions, exterminations, but it also has very strong character journeys. The breaking up of the family of companions, who have been together for two seasons now, the last adventure for this quartet, was always going to be emotional." We hope Jack has a speech ready for that too.

Caption: Barrowman told only his family and David Tennant about his return; below: Whittaker

Caption: Fun fact: One man, Nicholas Briggs, has voiced the Daleks since 2005

WHO'S YOUR FAVORITE DOCTOR?