Cinema Verity's star continues to shine in the television sky 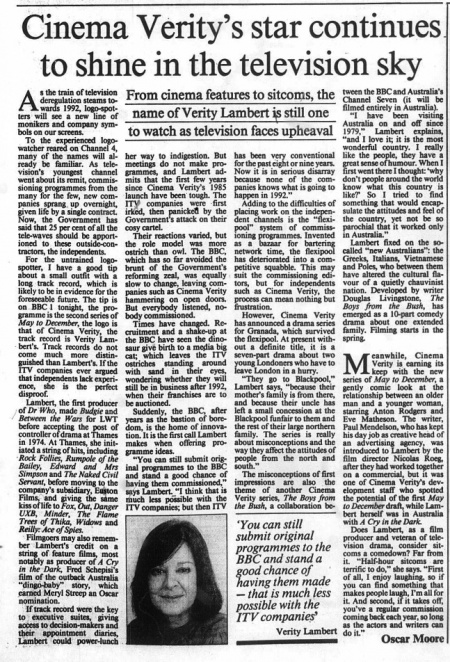 From cinema features to sitcoms, the name of Verity Lambert is still one to watch as television faces upheaval

As the train of television deregulation steams towards 1992, logo-spotters will see a new line of monikers and company symbols on our screens.

To the experienced logo-watcher reared on Channel 4, many of the names will already be familiar. As television's youngest channel went about its remit, commissioning programmes from the many for the few, new companies sprang up overnight, given life by a single contract. Now, the Government has said that 25 per cent of all the tele-waves should be apportioned to these outside-contractors, the independents. For the untrained logo-spotter, I have a good tip about a small outfit with a long track record, which is likely to be in evidence for the foreseeable future. The tip is on BBC 1 tonight, the programme is the second series of May to December, the logo is that of Cinema Verity, the track record is Verity Lamberts. Track records do not come much more distinguished than Lamberts. If the ITV companies ever argued that independents lack experience, she is the perfect disproof.

Lambert, the first producer of Dr Who, made Budgie and Between the Wars for LWT before accepting the post of controller of drama at Thames in 1974. At Thames, she initiated a string of hits, including Rock Follies, Rumpole of the Bailey, Edward and Mrs Simpson and The Naked Civil Servant, before moving to the company's subsidiary, Easton Films, and giving the same kiss of life to Fox, Out, Danger UXB, Minder, The Flame Trees of Thika, Widows and Reilly: Ace of Spies.

Filmgoers may also remember Lambert's credit on a string of feature films, most notably as producer of A Cry in the Dark, Fred Schepisi's film of the outback Australia "dingo-baby" story, which earned Meryl Streep an Oscar nomination.

If track record were the key to executive suites, giving scours to decision-makers and their appointment diaries, Lambert could power-lunch her way to indigestion. But meetings do not make programmes, and Lambert admits that the first few years since Cinema Verity's 1985 launch have been tough. The ITV companies were first irked, then panicked by the Government's attack on their cosy cartel.

Their reactions varied, but the role model was more ostrich than owl. The BBC, which has so far avoided the brunt of the Government's reforming zeal, was equally slow to change, leaving companies such as Cinema Verity hammering on open door0073. But everybody listened, nobody commissioned.

Times have changed. Recruitment and a shake-up at the BBC have seen the dinosaur give birth to a mettle big cat which leaves the ITV ostriches standing around with sand in their eyes, wondering whether they will still be in business after 1992, when their franchises are to be auctioned.

Suddenly, the BBC, after years as the bastion of boredom, is the home of innovation. It is the first call Lambert makes when offering programme ideas.

You can still submit original programmes to the BBC and stand a good chance of having them commissioned," says Lambert, "I think that is much less poisible with the ITV companies; but then ITV has been very conventional for the past eight or nine years. Now it is in serious disarray because none of the companies knows what is going to happen in 1992."

Adding to the difficulties of placing work on the independent channels is the "flexi-poor system of commissioning programmes. Invented as a bazaar for bartering network time, the flexipool has deteriorated into a competitive squabble. This may suit the commissioning editors, but for independents such as Cinema Verity, the process can mean nothing but frustration.

However, Cinema Verity has announced a drama series for Granada, which survived the flexipool. At present without a definite title, it is a seven-part drama about two young Londoners who have to leave London in a hurry. "They go to Blackpool," Lambert says, "because their mother's family is from there, and because their uncle has left a small concession at the Blackpool funfair to them and the rest of their large northern family. The series is really about misconceptions and the way they affect the attitudes of people from the north and south."

The misconceptions of first impressions are also the theme of another Cinema Verity series, The Boys from the Bush, a collaboration be 'You can still submit original programmes to the BBC and stand a good chance of having them made — that is much less possible with the ITV companies'

Verity Lambert tween the BBC and Australia's Channel Seven (it will be filmed entirely in Australia). "I have been visiting Australia on and off since 1979," Lambert explains, -and I love it; it is the most wonderful country. I really like the people, they have a great sense of humour. When first went there I thought 'why don't people around the world know what this country is like? So I tried to find something that would encapsulate the attitudes and feel of the country, yet not be so parochial that it worked only in Australia."

Lambert fixed on the so-called "new Australians": the Greeks, Italians, Vietnamese and Poles, who between them have altered the cultural flavour of a quietly chauvinist nation. Developed by writer Douglas Livingstone, The Boys from the Bush, has emerged as a 10-part comedy drama about one extended family. Filming starts in the spring.

Meanwhile, Cinema Verity is earning its keep with the new series of May to December, a gently comic look at the relationship between an older man and a younger woman, starring Anton Rodgers and Eve Matheson. The writer, Paul Mendelson, who has kept his day job as creative head of an advertising agency, was introduced to Lambert by the film director Nicolas Roeg after they had worked together on a commercial, but it was one of Cinema Verity's development staff who spotted the potential of the first May to December draft, while Lambert herself was in Australia with A Cry in the Dark.

Does Lambert, as a film producer and veteran of television drama, consider sitcoms a comedown? Far from it. "Half-hour sitcoms are terrific to do," she says. "Fast of all, I enjoy laughing, so if you can find something that makes people laugh, I'm all for it. And second, if it takes off, you've a regular commission coming back each year, so long as the actors and writers can do it."