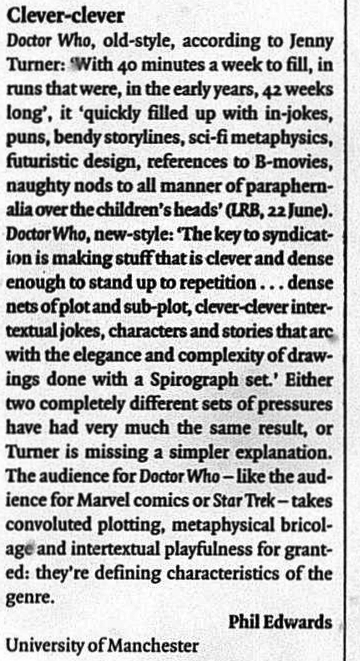 Doctor Who, old-style, according to Jenny Turner: 'With 40 minutes a week to fill, in runs that were, in the early years, 42 weeks long', it 'quickly filled up with in-jokes, puns, bendy storylines, sci-fi metaphysics, futuristic design, references to B-movies, naughty nods to all manner of paraphernalia over the children's heads' (LRB, 22 June). Doctor Who, new-style: 'The key to syndication is making stuff that is clever and dense enough to stand up to repetition … dense nets of plot and sub-plot, clever-clever intertextual jokes, characters and stories that arc with the elegance and complexity of drawings done with a Spirograph set.' Either two completely different sets of pressures have had very much the same result, or Turner is missing a simpler explanation. The audience for Doctor Who – like the audience for Marvel comics or Star Trek – takes convoluted plotting, metaphysical bricolage and intertextual playfulness for granted: they're defining characteristics of the genre.