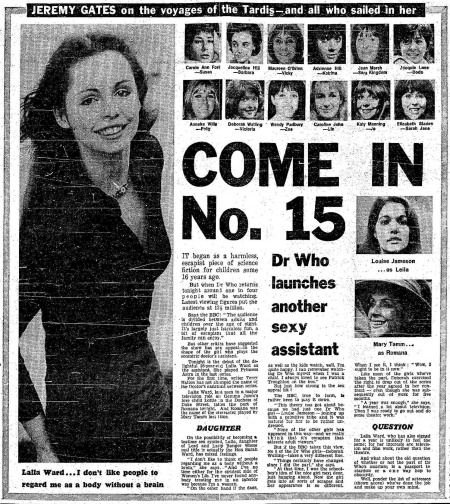 Dr Who launches another assistant

IT began as a harmless, escapist piece of science fiction for children some 16 years ago.

But when Dr Who returns tonight around one in four people will be watching. Latest viewing figures put the audience at 12 1/2 million.

Says the BBC: "The audience is divided between adults and children over the age of eight. It's largely just harmless fun, a bit of escapism that all the family can enjoy."

But other critics have suggested the show has sex appeal—in the shape of the girl who plays the eccentric' doctor's assistant.

Tonight is the debut of the delightful 28-year-old Lalla Ward as the assistant. She played Princess Astra in the last series.

For the first time, writer Terry Nation has not changed the name of the Doctor's assistant between series.

Lalla Ward, last seen in a major television role as Gemma Jones's love child Lottie in the Duchess of Duke Street, takes the part of Romana tonight. And Romana was the name of the character played by Mary Tamm last time.

On the possibility of becoming a teatime sex symbol, Lalla, daughter of Lord and Lady Bangor whose real title is actually the Hon Sarah Ward, has mixed feelings.

"I don't like to think of people regarding me as a body without a brain," she says. "And I've no time either for the strident side of Women's Lib. I've never found anybody treating me in an inferior because I'm a woman.

"On the other hand if the dads, as well as the kids watch, well, I'm quite happy. I can remember watching Dr Who myself when I was a child. I always loved to see Patrick Troughton on the box."

But just how strong is the sex appeal bit ?

The BBC, true to form, is rather keen to pay it down.

"This theory has got about because we had just one Dr Who girl— Louise Jameson— joining up with a primitive tribe and it was natural for her to be rather undressed.

"None of the other girls has appeared in this way--and we really think that it's escapism that attracts adult viewers."

But if the BBC takes this view, No 8 of the Dr Who girls—Deborah Watling—takes a very different line.

"Things certainly have changed since I did the part," she says.

"At that time, I was the schoolboy's idea of the nice girl next door, just hanging about. Now the girl gets into all sorts of scrapes and her appearance is so different.

Like most of the girls who've taken the part, Deborah exercised the right to drop out of the series after the year agreed in her contract-- even though she was subsequently out of work for five months.

"A year was enough," she says. "I learned a lot about television. Then I was ready to go out and do some theatre work."

Lalla Ward, who has also signed for a year is unlikely to feel the same; for her interests are television and film work, rather than the theatre.

And what about the old question of whether or not the part of Dr Who's assistant is a passport to stardom or a one way bop to obscurity.

Well, ponder the list of actresses (shown above) who've done the job and make up your own mind.