Covering up the naughty bits 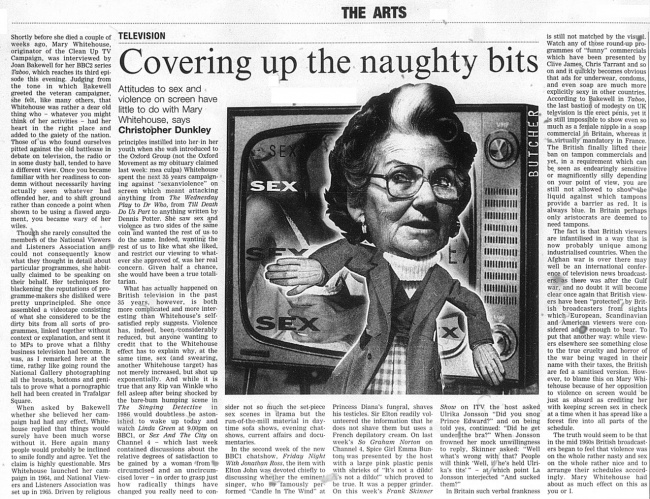 TELEVISION: Attitudes to sex and violence on screen have little to do with Mary Whitehouse, says Christopher Dunkley

Shortly before she died a couple of weeks ago, Mary Whitehouse, originator of the Clean Up TV Campaign, was interviewed by Joan Bakewell for her BBC2 series Taboo, which reaches its third episode this evening. Judging from the tone in which Bakewell greeted the veteran campaigner, she felt, like many others, that Whitehouse was rather a dear old thing who - whatever you might think of her activities - had her heart in the right place and added to the gaiety of the nation. Those of us who found ourselves pitted against the old battleaxe in debate on television, the radio or in some dusty hall, tended to have a different view. Once you became familiar with her readiness to condemn without necessarily having actually seen whatever had offended her, and to shift ground rather than concede a point when shown to be using a flawed argument, you became wary of her wiles.

Though she rarely consulted the members of the National Viewers and Listeners Association and could not consequently know what they thought in detail about particular programmes, she habitually claimed to be speaking on their behalf. Her techniques for blackening the reputations of programme-makers she disliked were pretty unprincipled. She once assembled a videotape consisting of what she considered to be the dirty bits from all sorts of programmes, linked together without context or explanation, and sent it to MPs to prove what a filthy business television had become. It was, as I remarked here at the time, rather like going round the National Gallery photographing all the breasts, bottoms and genitals to prove what a pornographic hell had been created in Trafalgar Square.

When asked by Bakewell whether she believed her campaign had had any effect, Whitehouse replied that things would surely have been much worse without it. Here again many people would probably be inclined to smile fondly and agree. Yet the claim is highly questionable. Mrs Whitehouse launched her campaign in 1964, and National Viewers and Listeners Association was set up in 1965. Driven by religious principles instilled into her in her youth when she was introduced to the Oxford Group (not the Oxford Movement as my obituary claimed last week: mea culpa) Whitehouse spent the next 35 years campaigning against "sexanviolence" on screen which meant attacking anything from The Wednesday Play to Dr Who, from Till Death Do Us Part to anything written by Dennis Potter. She saw sex and violence as two sides of the same coin and wanted the rest of us to do the same. Indeed, wanting the rest of us to like what she liked, and restrict our viewing to whatever she approved of, was her real concern. Given half a chance, she would have been a true totalitarian.

What has actually happened on British television in the past 35 years, however, is both more complicated and more interesting than Whitehouse's self-satisfied reply suggests. Violence has, indeed, been considerably reduced, but anyone wanting to credit that to the Whitehouse effect has to explain why, at the same time, sex (and swearing, another Whitehouse target) has not merely increased, but shot up exponentially. And while it is true that any Rip van Winkle who fell asleep after being shocked by the bare-bum humping scene in The Singing Detective in 1986 would doubtless be astonished to wake up today and watch Linda Green at 9.00pm on BBC1, or Sex And The City on Channel 4 - which last week contained discussions about the relative degrees of satisfaction to be gained by a woman from a circumcised and an uncircumcised lover - in order to grasp just how radically things have changed you really need to consider not so much the set-piece sex scenes in drama but the run-of-the-mill material in daytime sofa shows, evening chatshows, current affairs and documentaries.

In Britain such verbal frankness is still not matched by the visual. Watch any of those round-up programmes of "funny" commercials which have been presented by Clive James, Chris Tarrant and so on and it quickly becomes obvious that ads for underwear, condoms, and even soap are much more explicitly sexy in other countries. According to Bakewell in Taboo, the last bastion of modesty on UK television is the erect penis, yet it is still impossible to show even so much as a female nipple in a soap commercial in Britain, whereas it is virtually mandatory in France. The British finally lifted their ban on tampon commercials and yet, in a requirement which can be seen as endearingly sensitive or magnificently silly depending on your point of view, you are still not allowed to show the liquid against which tampons provide a barrier as red. It is always blue. In Britain perhaps only aristocrats are deemed to need tampons.

The fact is that British viewers are infantilised in a way that is now probably unique among industrialised countries. When the Afghan war is over there may well be an international conference of television news broadcasters, as there was after the Gulf war, and no doubt it will become clear once again that British viewers have been "protected" by British broadcasters from sights which European, Scandinavian and American viewers were considered adult enough to bear. To put that another way: while viewers elsewhere see something close to the true cruelty and horror of the war being waged in their name with their taxes, the British are fed a sanitised version. However, to blame this on Mary Whitehouse because of her opposition to violence on screen would be just as absurd as crediting her with keeping screen sex in check at a time when it has spread like a forest fire into all parts of the schedule.