Cult of fans knows that the Doctor is in 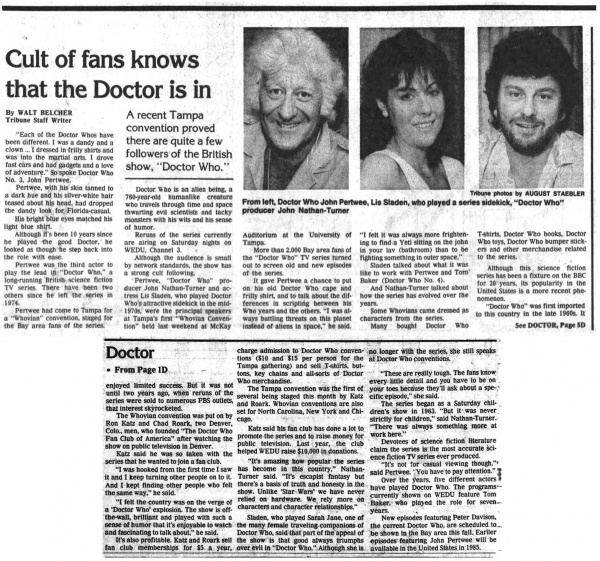 A recent Tampa convention proved there are quite a few followers of the British show, "Doctor Who."

"Each of the Doctor Whos have been different. I was a dandy and a clown ... I dressed in frilly shirts and was into the martial arts. I drove fast cars and had gadgets and a love of adventure." So spoke Doctor Who No. 3, John Pertwee.

Pertwee, with his skin tanned to a dark hue and his silver-white hair teased about his head, had dropped the dandy look for. Florida-casual.

Although it's been 10 years since he played the good Doctor. he looked as though he step back into the role with ease.

Pertwee was the third actor to play the lead in "Doctor Who," a long-running British, science fiction TV series. There have been two others since he left the series in 1974.

Pertwee had come to Tampa for a "Whovian" convention, staged for the Bay area fans of the series.

Doctor Who is an alien being, a 760-year-old humanlike creature who travels through time and space thwarting evil scientists and tacky monsters with his wits and his sense of humor.

Reruns of the series currently are airing on Saturday nights on WEDU, Channel 3.

Although the audience is small by network standards. the show has a strong cult following.

Pertwee, "Doctor Who" producer John Nathan-Turner and actress Lis Sladen, who played Doctor Who's attractive sidekick in the mid-1970s, were the principal speakers at Tampa's first "Whovian Convention" held last weekend at McKay Auditorium at the University of Tampa.

More than 2,000 Bay area fans of the "Doctor Who" TV series turned out to screen old and new episodes of the series.

It gave Pertwee a chance to put on his old Doctor Who cape and frilly shirt, and to talk about the differences in scripting between his Who years and the others. "I was always battling threats on this planet instead of aliens in space," he said. "I felt it was always more frightening to find a Yeti sitting on the john in your lav (bathroom) than to be fighting something in outer space."

Sladen talked about what it was like to work with Pertwee and Tom Baker (Doctor Who No. 4).

And Nathan-Turner talked about how the series has evolved over the years.

Some Whovians came dressed as characters from the series.

Although this science fiction series has been a fixture on the BBC for 20 years, its popularity in the United States is a more recent phenomenon.

"Doctor Who" was first imported to this country in the late 1960s. It enjoyed limited success. But it was not until two years ago, when reruns of the series were sold to numerous PBS outlets, that interest skyrocketed.

The Whovian convention was put on by Ron Katz and Chad Roark, two Denver, Colo., men, who founded "The Doctor Who Fan Club of America" after watching the show on public television in Denver.

Katz said he was so taken with the series that he wanted to join a fan club.

"I felt the country was on the verge of a 'Doctor Who' explosion. The show is off-the-wall, brilliant and played with such a sense of humor that it's enjoyable to watch and fascinating to talk about," he said.

It's also profitable. Katz and Roark sell fan club memberships for $5 a year, charge admission to Doctor Who conventions ($10 and $15 per person for the Tampa gathering) and sell T-shirts. buttons, key chains and all-sorts of Doctor Who merchandise.

The Tampa convention was the first of several being staged this month by Katz and Roark. Whovian conventions are also set for North Carolina, New York and Chicago.

Katz said his fan club has done a lot to promote the series and to raise money for public television. Last year, the club helped WEDU raise $10,000 in donations.

"It's amazing how popular the series has become in this country," Nathan-Turner said. "It's escapist fantasy but there's a basis of truth and honesty in the show. Unlike 'Star Wars' we have never relied on hardware. We rely more on characters and character relationships."

Sladen, who played Sarah Jane, one of the many female traveling companions of Doctor Who, said that part of the appeal of the show is that good always triumphs over evil in "Doctor Who." Although she is no longer with the series, she still speaks at Doctor Who conventions.

"These are really tough. The fans know every little detail and you have to be on your toes because they'll ask about a specific episode," she said.

The series began as a Saturday children's show in 1963. "But it was never strictly for children," said Nathan-Turner. "There was always something more at work here."

"It's not for casual viewing though," said Pertwee. "You have to pay attention."

Over the years, five different actors have played Doctor Who. The programs currently shown on WEDU feature Tom Baker, who played the role for seven. years.