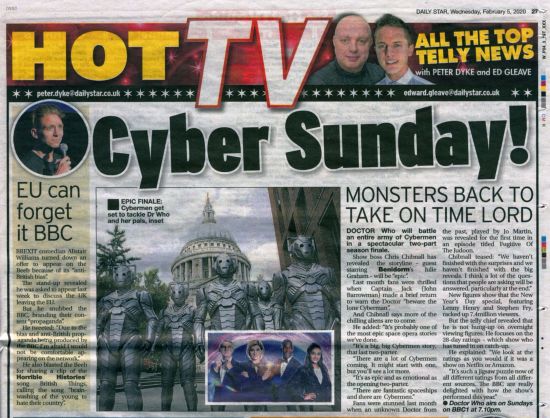 MONSTERS BACK TO TAKE ON TIME LORD

DOCTOR Who will battle an entire army of Cybermen in a spectacular two-part season finale.

Last month fans were thrilled when Captain Jack (John Barrowman) made a brief return to warn the Doctor "beware the lone Cyberman'.

And Chibnall says more of the chilling aliens are to come.

He added: "It's probably one of the most epic space opera stories we've done.

"It's a big, big Cybermen story, that last two-parter.

"There are a lot of Cybermen coming. It might start with one, but you'll see a lot more.

"It's as epic and as emotional as the opening two-parter.

"There are fantastic spaceships and there are Cybermen."

Fans were stunned last month when an unknown Doctor from the past, played by Jo Martin, was revealed for the first time in an episode titled Fugitive Of The Judoon.

But the telly chief revealed that he is not hung-up on overnight viewing figures. He focuses on the 28-day ratings - which show who has tuned in on catch-up.

He explained: "We look at the ratings as you would if it was a show on Netflix or Amazon.

"It's such a jigsaw puzzle now of all different ratings from all different sources. The BBC are really delighted with how the show's performed this year."

Caption: EPIC FINALE: Cybermen get set to tackle Dr Who and her pals, inset