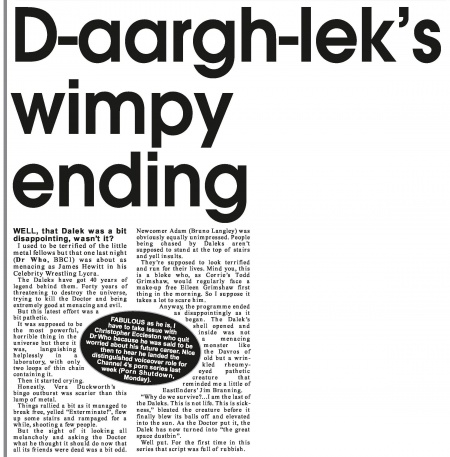 WELL, that Dalek was a bit disappointing, wasn't it?

I used to be terrified of the little metal fellows but that one last night (Dr Who, BBC1) was about as menacing as James Hewitt in his Celebrity Wrestling Lycra.

The Daleks have got 40 years of legend behind them. Forty years of threatening to destroy the universe, trying to kill the Doctor and being extremely good at menacing and evil. But this latest effort was a bit pathetic.

It was supposed to be the most powerful, horrible thing in the universe but there it was, languishing helplessly in a laboratory, with only two loops of thin chain containing it.

Then it started crying. Honestly. Vera Duckworth 's bingo outburst was scarier than this lump of metal.

Things rallied a bit as it managed to break free, yelled "Exterminate!", flew up some stairs and rampaged for a while, shooting a few people.

But the sight of it looking all melancholy and asking the Doctor what he thought it should do now that all its friends were dead was a bit odd. Newcomer Adam (Bruno Langley) was obviously equally unimpressed. People being chased by Daleks aren't supposed to stand at the top of stairs and yell insults.

They're supposed to look terrified and run for their lives. Mind you, this is a bloke who, as Corrie's Todd Grimshaw, would regularly face a make-up free Eileen Grimshaw first thing in the morning. So I suppose it takes a lot to scare him.

Anyway, the programme ended as disappointingly as it began. The Dalek's shell opened and inside was not a menacing monster like the Davros of old but a wrinkled rheumy-eyed pathetic creature that reminded me a little of EastEnders' Jim Branning.

"Why do we survive?...I am the last of the Daleks. This is not life. This is sickness," bleated the creature before it finally blew its balls off and elevated into the sun. As the Doctor put it, the Dalek has now turned into "the great space dustbin".

Well put. For the first time in this series that script was full of rubbish.