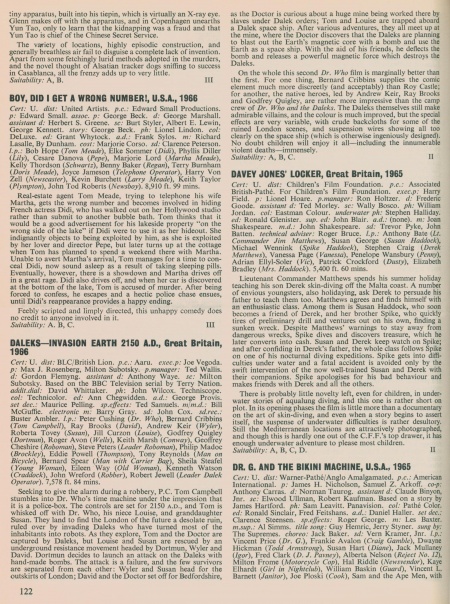 Seeking to give the alarm during a robbery, P.C. Tom Campbell stumbles into Dr. Who's time machine under the impression that it is a police-box. The controls are set for 2150 A.D., and Tom is whisked off with Dr. Who, his niece Louise, and granddaughter Susan. They land to find the London of the future a desolate ruin, ruled over by invading Daleks who have turned most of the inhabitants into robots. As they explore, Tom and the Doctor are captured by Daleks, but Louise and Susan are rescued by an underground resistance movement headed by Dortmun, Wyler and David. Dortmun decides to launch an attack on the Daleks with hand-made bombs. The attack is a failure, and the few survivors are separated from each other: Wyler and Susan head for the outskirts of London; David and the Doctor set off for Bedfordshire, as the Doctor is curious about a huge mine being worked there by slaves under Dalek orders; Tom and Louise are trapped aboard a Dalek space ship. After various adventures, they all meet up at the mine, where the Doctor discovers that the Daleks are planning to blast out the Earth's magnetic core with a bomb and use the Earth as a space ship. With the aid of his friends, he deflects the bomb and releases a powerful magnetic force which destroys the Daleks.

On the whole this second Dr. Who film is marginally better than the first. For one thing, Bernard Cribbins supplies the comic element much more discreetly (and acceptably) than Roy Castle; for another, the native heroes, led by Andrew Keir, Ray Brooks and Godfrey Quigley, are rather more impressive than the camp crew of Dr. Who and the Daleks. The Daleks themselves still make admirable villains, and the colour is much improved, but the special effects are very variable, with crude backcloths for some of the ruined London scenes, and suspension wires showing all too clearly on the space ship (which is otherwise ingeniously designed). No doubt children will enjoy it all—including the innumerable violent deaths—immensely.