Death is the only answer for Doctor Who scribes 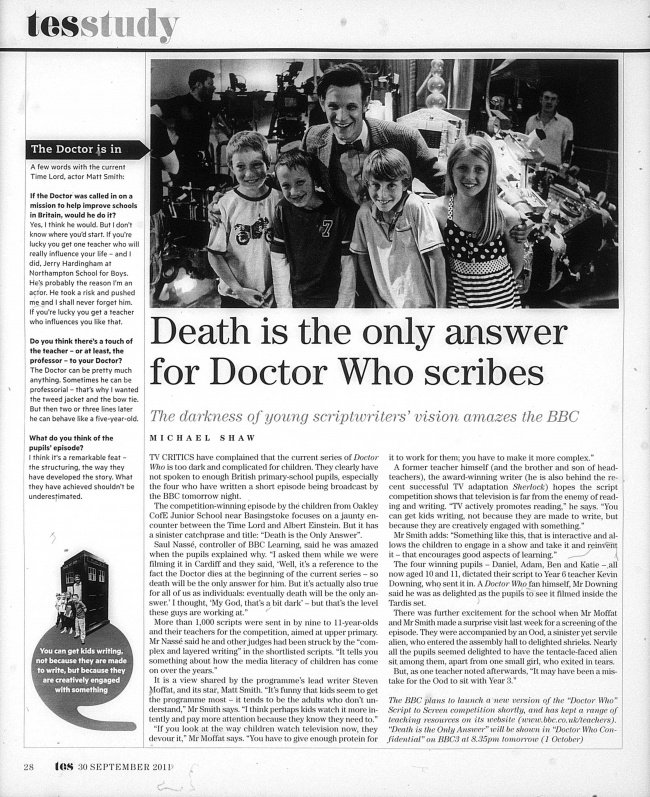 The darkness of young scriptwriters' vision amazes the BBC

TV CRITICS have complained that the current series of Doctor Who is too dark and complicated for children. They clearly have not spoken to enough British primary-school pupils, especially the four who have written a short episode being broadcast by the BBC tomorrow night.

The competition-winning episode by the children from Oakley CofE Junior School near Basingstoke focuses on a jaunty encounter between the Time Lord and Albert Einstein. But it has a sinister catchprase and title: "Death is the Only Answer". Saul Nasse, controller of BBC Learning, said he was amazed when the pupils explained why. "I asked them while we were filming it in Cardiff and they said, 'Well, it's a reference to the fact the Doctor dies at the beginning of the current series - so death will be the only answer for him. But it's actually also true for all of us as individuals: eventually death will be the only answer.' I thought, 'My God, that's a bit dark' - but that's the level these guys are working at."

More than 1,000 scripts were sent in by nine to 11-year-olds and their teachers for the competition, aimed at upper primary. Mr Nasse said he and other judges had been struck by the "complex and layered writing" in the shortlisted scripts. "It tells you something about how the media literacy of children has come on over the years."

It is a view shared by the programme's lead writer Steven Moffat, and its star, Matt Smith. "It's funny that kids seem to get the programme most - it tends to be the adults who don't understand," Mr Smith *says. "I think perhaps kids watch it more intently and pay more attention because they know they need to." "If you look at the way children watch television now, they devour it," Mr Moffat says. "You have to give enough protein for

it to work for them; you have to make it more complex."

A former teacher himself (and the brother and son of head-teachers), the award-winning writer (he is also behind the recent successful TV adaptation Sherlock) hopes the script competition shows that television is far from the enemy of reading and writing. "TV actively promotes reading," he says. "You can get kids writing, not because they are made to write, but because they are creatively engaged with something."

Mr Smith adds: "Something like this, that is interactive and allows the children to engage in a show and take it and reinvent it - that encourages good aspects of learning."

The four winning pupils - Daniel, Adam, Ben and Katie - all now aged 10 and 11, dictated their script to Year 6 teacher Kevin Downing, who sent it in. A Doctor Who fan himself, Mr Downing said he was as delighted as the pupils to-see it filmed inside the Tardis set.

There was further excitement for the school when Mr Moffat and Mr Smith made a surprise visit last week fora screening of the episode. They were accompanied by an Ood, a sinister yet servile alien, who entered the assembly hall to delighted shrieks. Nearly all the pupils seemed delighted to have the tentacle-faced alien sit among them, apart from one small girl, who exited in tears. But, as one teacher noted afterwards, "It may have been a mistake for the Ood to sit with Year 3."

The BBC plans to launch a new version of the "Doctor Who" Script to Screen competition shortly, and has kept a range of leaching resources on its website (www.bbc.co.uk/teachers). "Death is the Only Answer" will be shown in "Doctor Who Confidential" on BBC3 at 8.35pm tomorrow (1 October)

If the Doctor was called in on a mission to help improve schools in Britain, would he do it?

Yes. I think he would. But I don't know where you'd start. If you're lucky you get one teacher who will really influence your life - and I did. Jerry Hardingham at Northampton School for Boys. He's probably the reason I'm an actor. He took a risk and pushed me and I shall never forget him. If you're lucky you get a teacher who influences you like that.

Do you think there's a touch of the teacher - or at least, the professor - to your Doctor?

The Doctor can be pretty much anything. Sometimes he can be professorial - that's why I wanted the tweed jacket and the bow tie. But then two or three lines later he can behave like a five-year-old.

What do you think of the pupils' episode?

I think it's a remarkable feat the structuring, the way they have developed the story. What they have achieved shouldn't be underestimated.