Debbie, among the Daleks 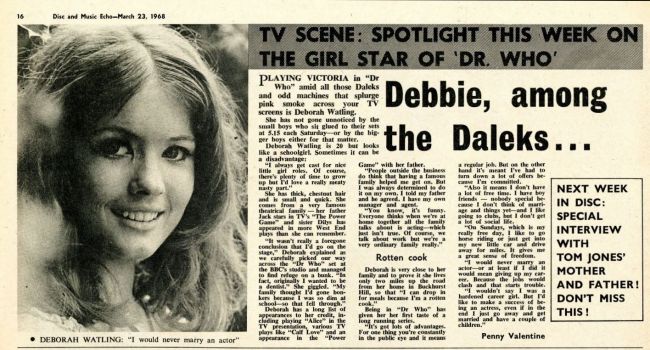 PLAYING VICTORIA in "Dr Who" amid all those Daleks and odd machines that splurge pink smoke across your TV screens is Deborah Watling.

She has not gone unnoticed by the small boys who sit glued to their sets at 5.15 each Saturday—or by the bigger boys either for that matter.

Deborah Watling is 20 but looks like a schoolgirl. Sometimes it can be a disadvantage:

"I always get cast for nice little girl roles. Of course, there's plenty of time to grow up but I'd love a really meaty nasty part."

She has thick, chestnut hair and is small and quick. She comes from a very famous theatrical family — her father Jack stars in TV's "The Power Game" and sister Dilys has appeared in more West End plays than she can remember.

"It wasn't really a foregone conclusion that I'd go on the stage," Deborah explained as we carefully picked our way across the "Dr Who" set at the BBC's studio and managed to find refuge on a bunk. "In fact, originally I wanted to be a dentist." She giggled. "My family thought I'd gone honkers because I was so dint at school—so that fell through."

Deborah has a long list of appearances to her credit, including playing "Alice" in the TV presentation, various TV plays like "Calf Love" and an appearance in the "Power Game" with her father.

"People outside the business do think that having a famous family helped me get on. But I was always determined to do it on my own. I told my father and he agreed. I have my own manager and agent.

"You know, it's funny. Everyone thinks when we're at home together all the family talks about is acting—which just isn't true. Of course, we talk about work but we're a very ordinary family really."

Deborah is very close to her family and to prove it she lives only two miles up the road front her home in Buckhurst Hill, so that "I can drop in for meals because I'm a rotten cook."

Being in "Dr Who" has given her her first taste of a long running series.

"It's got lots of advantages. For one thing you're constantly in the public eye and it means

a regular job. But on the other hand it's meant I've had to turn down a lot of offers because I'm committed.

"Also it means I don't have a lot of free time. I have boy friends — nobody special because I don't think of marriage and things yet—and I like going to clubs, but I don't get a lot of social life.

"On Sundays, which is my really free day, I like to go horse riding or just get into my new little car and drive away for miles. It gives me a great sense of freedom.

"I would never marry an actor—or at least if I did it would mean giving up my career. Because the jobs would clash and that starts trouble.

"I wouldn't say I was a hardened career girl. But I'd like to make a success of being an actress, even if in the end I just go away and get married and have a couple of children."