Dhawan's adventures in space and time 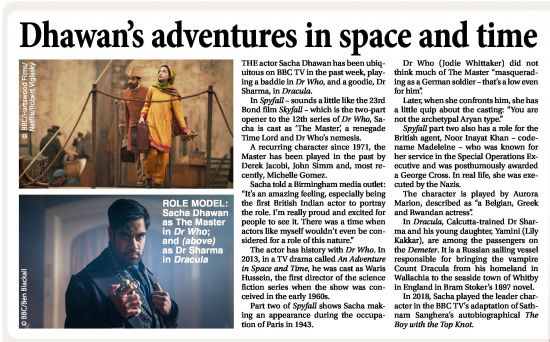 THE actor Sacha Dhawan has been ubiquitous on BBC TV in the past week, playing a baddie in Dr Who, and a goodie, Dr Sharma, in Dracula.

In Spyfall - sounds a little like the 23rd Bond film Skyfall - which is the two-part opener to the 12th series of Dr Who, Sacha is cast as 'The Master', a renegade Time Lord and Dr Who's nemesis.

A recurring character since 1971, the Master has been played in the past by Derek Jacobi, John Simm and, most recently, Michelle Gomez.

Sacha told a Birmingham media outlet: "It's an amazing feeling, especially being the first British Indian actor to portray the role. I'm really proud and excited for people to see it. There was a time when actors like myself wouldn't even be considered for a role of this nature:'

The actor has history with Dr Who. In 2013, in a TV drama called An Adventure in Space and Time, he was cast as Waris Hussein, the first director of the science fiction series when the show was conceived in the early 1960s.

Part two of Spyfall shows Sacha making an appearance during the occupation of Paris in 1943.

Dr Who (Jodie Whittaker) did not think much of The Master "masquerading as a German soldier - that's a low even for him."

Later, when she confronts him, she has a little quip about the casting: "You are not the archetypal Aryan type."

Spyfall part two also has a role for the British agent, Noor Inayat Khan - code-name Madeleine - who was known for her service in the Special Operations Executive and was posthumously awarded a George Cross. In real life, she was executed by the Nazis.

The character is played by Aurora Marion, described as "a Belgian, Greek and Rwandan actress."

In Dracula, Calcutta-trained Dr Sharma and his young daughter, Yamini (Lily Kakkar), are among the passengers on the Demeter. It is a Russian sailing vessel responsible for bringing the vampire Count Dracula from his homeland in Wallachia to the seaside town of Whitby in England in Bram Stoker's 1897 novel.

In 2018, Sacha played the leader character in the BBC TV's adaptation of Sathnam Sanghera's autobiographical The Boy with the Top Knot.

Caption: ROLE MODEL: Sacha Dhawan as The Master in Dr Who; and (above) as Dr Sharm in Dracula