Do You Have Dr Who's Number? 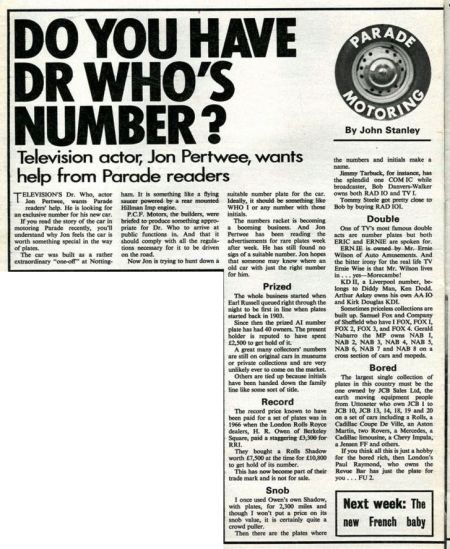 TELEVISION'S Or. Who, actor Jon Pertwee, wants Parade readers' help. He is looking for an exclusive number for his new car. If you read the story of the car in motoring Parade recently, you'll understand why Jon feels the car is worth something special in the way of plates.

The car was built as a rather extraordinary "one-off" at Nottingham. It is something like a flying saucer powered by a rear mounted Hillman Imp engine.

P.C.F. Motors, the builders, were briefed to produce something appropriate for Dr. Who to arrive at public functions in. And that it should comply with all the regulations necessary (or it to be driven on the road.

Now Jon is trying to hunt down a suitable number plate for the car. Ideally, it should be something like WHO 1 or any number with those initials.

The numbers racket is becoming a booming business. And Jon Pertwee has been reading the advertisements for rare plates week after week. He has still found no sign of a suitable number. Jon hopes that someone may know where an old car with just the right number for him.

The whole business started when Earl Russell queued right through the night to be first in line when plates started back in 1903.

Since then the prized Al number plate has had 40 owners. The present holder is reputed to have spent £2,500 to get hold of it.

A great many collectors' numbers are still on original an in museums or private collections and are very unlikely ever to come on the market.

Others are tied up because initials have been handed down the family line like some sort of title.

The record price known to have been paid for a set of plates was in 1966 when the London Rolls Royce dealers, H. R. Owen of Berkeley Square. paid a staggering £3,300 for RR1.

This has now become part of their trade mark and is not for sale.

I once used Owen's own Shadow, with plates, for 2,303 miles and though I won't put a price on its snob value, it is certainly quite a crowd puller.

Jimmy Tarbuck, for instance, has the splendid one COM IC while broadcaster, Bob Danvers-Walker owns both RAD 10 and TV I.

Tommy Steele got pretty close to Bob by buying RAD 101.

One of TV's most famous double acts are number plates but both ERIC and ERNIE are spoken for.

ERN IE is owned by Mr. Ernie Wilson of Auto Amusements. And the bitter irony for the real life TV Ernie Wise is that Mr. Wilson lists in ... yes—Morecambe!

The largest single collection of plates in this country must be the one owned by JCB Sala Ltd, the earth moving equipment people from Demeter who own JCB I to JCB 10, JCB 13. 14, 1$, 19 and 20 on a set of can including a Rolls, a Cadillac Coupe De Ville, an Aston Martin, two Rovers, a Mercedes, a Cadillac limousine, a Chevy Impala, a Jensen FF and others.

If you think all this is just a hobby for the bored rich, then London's Paul Raymond, who owns the Revue Bar has just the plate for you ... F11 2.