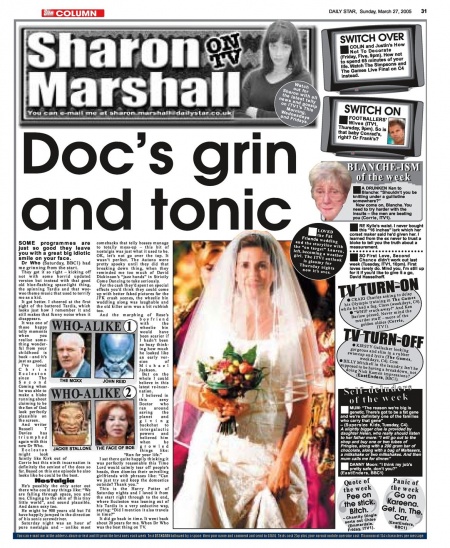 SOME programmes are just so good they leave you with a great big idiotic smile on your face.

Dr Who (Saturday, BBC1) had me grinning from the start.

They got it so right — kicking off not with some horrid updated version but instead with that good old blue-flashing space-light thing, the spinning Tardis and that woo-woo theme music that used to terrify me as a kid.

It got better. I cheered at the first sight of the battered Tardis, which looks just how I remember it and still makes that funny noise when it disappears.

It was one of those happy telly moments when you realise something wonderful from your childhood is back — and it's just as good.

I've loved Chris Eccleston since The Second Coming when he was able to make a bloke running about claiming to be the Son of God look perfectly plausible on the screen.

And writer Russell Davies has triumphed again with this new Dr Who. Eccleston might look faintly like Kirk out of Corrie but this ninth incarnation is definitely the sexiest of the dots so far. Based on this one episode he also looks like he could be the best.

He's possibly the only actor out there who could say things like: "We are falling through space, you and me. Clinging to the skin of this tiny little world", and sound plausible. And damn sexy too.

He might be 900 years old but I'd have happily jumped in the direction of his sonic screwdriver.

Saturday night was an hour of pure nostalgia and — unlike most comebacks that telly bosses manage to totally mess-up — this bit of nostalgia was just what it used to be. OK, let's not go over the top. It wasn't perfect. The Autons were pretty spooky until they did that breaking down thing, when they reminded me too much of David Dickinson's "jazz hands" in Strictly Come Dancing to take seriously.

For the cash they'd spent on special effects you'd think they could come up with better faked pictures for the JFK crash scenes, the wheelie bin waddling along was laughable and the old killer arm was a bit rubbish too.

And the morphing of Rose's boyfriend with the wheelie bin would have been scarier if I hadn't been so busy thinking how much he looked like an early version of Michael Jackson.

But on the whole I could believe in this latest re-incarnation. I believed in this sexy Doctor who ran around saving the planet and giving backchat to intergalactic powers and believed him when he growled things like: "Run for your life."

I sat there quite happily thinking it was perfectly reasonable this Time Lord would calmly tear off people's heads, then dismiss their snivelling girlfriends with phrases like: "Can we just try and keep the domestics outside? Thank you."

This is the Harry Potter of Saturday nights and I loved it from the start right through to the end, where Eccleston was leaning out of his Tardis in a very seductive way, saying: "Did I mention it also travels in time?"

It did go back in time. It went back about 20 years for me. When Dr Who was the best thing on TV.