Doctor's Companions Are Reaching The Top 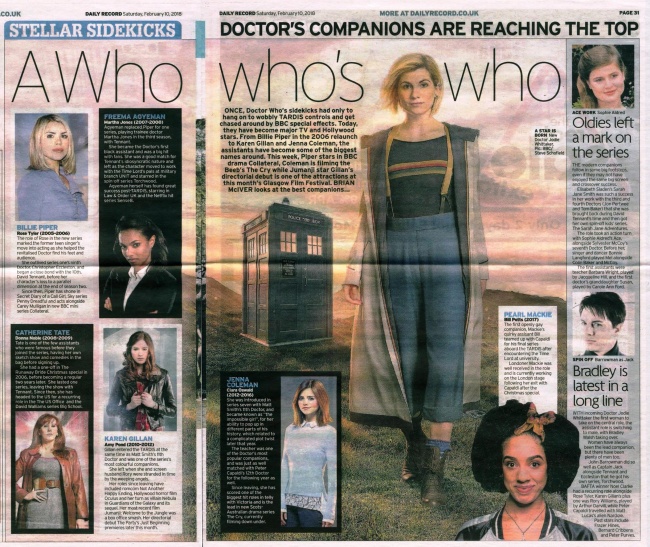 ONCE, Doctor Who's sidekicks had only to hang on to wobbly TARDIS controls and get chased around by BBC special effects. Today, they have become major TV and Hollywood stars. From Billie Piper in the 2006 relaunch to Karen Gillan and Jenna Coleman, the assistants have become some of the biggest names around. This week, Piper stars in BBC drama Collateral, Coleman is filming the Beeb's The Cry while Jumanji star Gillan's directorial debut is one of the attractions at this month's Glasgow Film Festival. BRIAN McIVER looks at the best companions...

The role of Rose in the new series marked the former teen singer's move into acting as she helped the revitalised Doctor find his feet and audience.

She outlived series one's ninth actor, Christopher Eccleston, and began a close bond with the 10th, David Tennant, before her character's loss to a parallel dimension at the end of season two.

Since then, Piper has shone in Secret Diary of a Call Girl, Sky series Penny Dreadful and acts alongside Carey Mulligan in new BBC mini series Collateral.

She became the Doctor's first black assistant and was a big hit with fans. She was a good match for Tennant's idiosyncratic nature and left as the character moved to work with the Time Lord's pals at military branch UNIT and starred in the spin-off series Torchwood.

Gillan entered the TARDIS at the same time as Matt Smith's11th Doctor and was one of the series's most colourful companions.

She left when she and screen husband Rory were stranded in time by the weeping angels.

Her roles since leaving have included romcom Not Another Happy Ending, Hollywood horror film Oculus and her turn as villain Nebula in Guardians of the Galaxy and its sequel. Her most recent film Jumanji: Welcome to the Jungle was a box office smash. Her directorial debut The Party's Just Beginning premieres later this month.

Tate is one of the few assistants who were famous before they joined the series, having her own sketch show and comedies in the bag before signing up.

She had a one-off in The Runaway Bride Christmas special in 2006, before becoming a regular two years later. She lasted one series, leaving the show with Tennant. Since then, she has headed to the US for a recurring role in the The US Office and the David Walliams series Big School.

She was introduced in series seven with Matt Smith's 11th Doctor, and became known as "the impossible girl", for her ability to pop up in different parts of his history, which related to a complicated plot twist later that year.

The teacher was one of the Doctor's most popular companions, and was just as well matched with Peter Capaldi's 12th Doctor for the following year as well.

Since leaving, she has scored one of the biggest hit roles in telly with Victoria and is the lead in new Scots-Australian drama series The Cry, currently filming down under.

The first openly gay companion, Mackie's quirky assisant Bill teamed up with Capaldi for his final series aboard the TARDIS after encountering the Time Lord at university.

Londoner Mackie was well received in the role and is currently working on the London stage following her exit with Capaldi after the Christmas special.

Oldies left a mark on the series

THE modern companions follow in some big footsteps, even if they may not have enjoyed the same big screen and crossover success.

Elisabeth Sladen's Sarah Jane Smith was such a success in her work with the third and fourth Doctors (Jon Pertwee and Tom Baker) that she was brought back during David Tennant's time and then got her own spin-off kids' series, The Sarah Jane Adventures.

The role took an action turn with Sophie Aldred's Ace, alongside Sylvester McCoy's seventh Doctor. Before her, singer and dancer Bonnie Langford played Mel alongside Colin Baker and McCoy.

Bradley is latest in a long line

WITH incoming Doctor Jodie Whittaker the first woman to take on the central role, the assistant role is switching to male, with Bradley Walsh taking over.

Women have always been the lead companion, but there have been plenty of men too.

John Barrowman did so well as Captain Jack alongside Tennant and Eccleston that he got his own series, Torchwood. BAFTA winner Noel Clarke had a recurring role alongside Rose Tyler. Karen Gillan's plus one was Rory Williams, played by Arthur Darvill, while Peter Capaldi travelled with Matt

Caption: SPIN OFF Barrowman as Jack