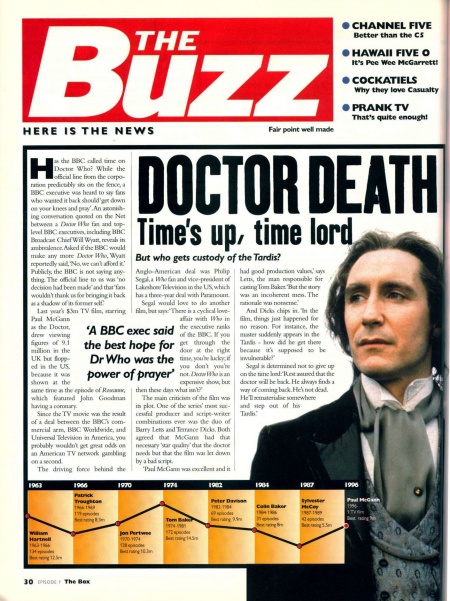 But who gets custody of the Tardis?

Has the BBC called time on Doctor Who? While the official line from the corporation predictably sits on the fence, a BBC executive was heard to say fans who wanted it back should 'get down on your knees and pray'. An astonishing conversation quoted on the Net between a Doctor Who fan and top-level BBC executives, including BBC Broadcast Chief Will Wyatt, reveals its ambivalence. Asked if the BBC would make any more Doctor Who, Wyatt reportedly said, 'No, we can't afford it.' Publicly, the BBC is not saying anything. The official line to us was 'no decision had been made' and that 'fans wouldn't thank us for bringing it back as a shadow of its former self:

Last year's $3m TV film, starring Paul McGann as the Doctor, drew viewing figures of 9.1 million in the UK but flopped in the US, because it was shown at the same time as the episode of Roseanne, which featured John Goodman having a coronary.

Since the TV movie was the result of a deal between the BBC's commercial arm, BBC Worldwide, and Universal Television in America, you probably wouldn't get great odds on an American TV network gambling on a second.

The driving force behind the Anglo-American deal was Philip Segal, a Who fan and vice-president of Lakeshore Television in the US, which has a three-year deal with Paramount.

Segal would love to do another film, but says: 'There is a cyclical love-affair with Who in the executive ranks of the BBC. If you get through the door at the right time, you're lucky; if you don't you're not. Doctor Who is an expensive show, but then these days what isn't?'

The main criticism of the film was its plot. One of the series' most successful producer and script-writer combinations ever was the duo of Barry Letts and Terrance Dicks. Both agreed that McGann had that necessary 'star quality' that the doctor needs but that the film was let down by a bad script.

'Paul McGann was excellent and it had good production values, says Letts, the man responsible for casting Tom Baker. 'But the story was an incoherent mess. The rationale was nonsense.'

And Dicks chips in. 'In the film, things just happened for no reason. For instance, the master suddenly appears in the Tardis - how did he get there because it's supposed to be invulnerable?'

Segal is determined not to give up on the time lord: 'Rest assured that the doctor will be back. He always finds a way of coming back. He's not dead. He'll rematerialise somewhere and step out of his Tardis.'