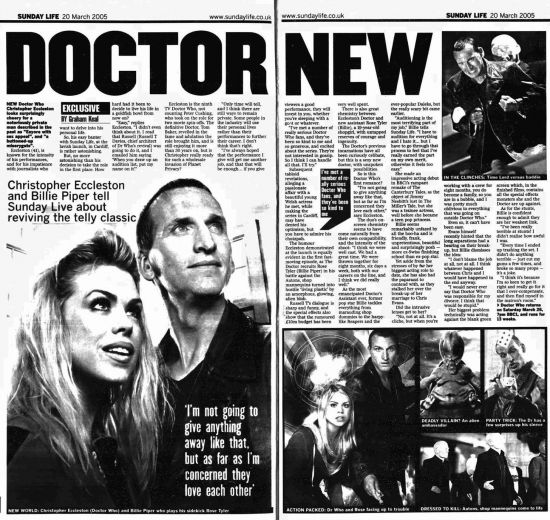 NEW Doctor Who Christopher Eccleston looks surprisingly cheery for a notoriously private man described In the past as "Eeyore with sex appeal", and "a buttoned-up miserygusts".

Eccleston (41), is known for the intensity of his performances, and for his impatience with journalists who want to delve into his personal life.

So, his easy banter with Sunday Life, at the lavish launch, in Cardiff, is rather astonishing. But, no more astonishing than his decision to take the role in the first place. How hard had it been to decide to live his life in a goldfish bowl from now on?

"Easy," replies Eccleston. "I didn't even think about it. I read that Russell (Russell T Davies, chief architect of Dr Who's revival) WAS going to do it, and I emailed him saying When you draw up an audition list, put my name on it"

Eccleston is the ninth TV Doctor Who, not counting Peter Cushing, who took on the role for two movie spin-offs. The definitive Doctor, Tom Baker, revelled in the fame and adulation the role brought hint and is still enjoying it more than 30 years on, but is Christopher really ready for such a wholesale invasion of Planet Privacy?

'Only time will tell, and I think there are still ways to remain private. Some people in the industry will use their personal lives rather than their performances to further their career. I don't think that's right.

"I've always hoped that the performance I give will get me another job, and that that will be enough... if you give viewers a good performance, they will Invest in you, whether you're sleeping with a god or whatever.

"I've met a number of really serious Doctor Who fans, and they've been so kind to me and so generous, and excited about the series. They're not interested in gossip. So I think I can handle all that. I'll try."

Subsequent tabloid revelations, alleging a passionate affair with a beautiful young Welsh actress he met, while making the series in Cardiff, may have dented his optimism, but you have to admire his chutzpah.

The humour Eccleston demonstrated at the launch is equally evident in the first fast-moving episode, as The Doctor recruits Rose Tyler (Billie Piper) in his battle against the Autons, shop mannequins turned into hostile 'living plastic' by an amorphous, glowing, alien blob.

Russell Ts dialogue Ls sharp and funny, and the special effects also "show that the rumoured £10m budget has been very well spent.

There is also great chemistry between Ecceleston's Doctor and new assistant Rose Tyler (Billie), a 19-year-old shopgirl, with untapped reserves of courage and ingenuity.

The Doctor's previous incarnations have all been curiously celibate, but this is a sexy new doctor, with unspoken possibilities. So is this Doctor Who's first romance?

Tin not going to give anything away like that, but as far as I'm concerned they love each other," says Eccleston. The duo's onscreen chemistry seems to have come naturally from their own compatibility, and the intensity of the shoot: I think we were well cast. We had a great time. We were thrown together for eight months, six days a week, both with our careers on the line, and I think we did really

As the most emancipated Doctor's Assistant ever, former pop star Billie tackles everything from marauding shop dummies to the harpy-like Reapers and the ever-popular Daleks, but the really scary bit came earlier.

"Auditioning is the most terrifying part of my job," Billie tells Sunday Life. 'l have to audition for everything and I hate it... but I have to go through that process to feel that I've really earned the part on my own merit, otherwise it feels too

She made an impressive acting debut in BBC1's rampant remake of The Canterbury Tales, as the object of Jimmy Nesbitt's lust in The Miller's Tale, but she was a trainee actress, well before she became a teen pop princess. Billie seems remarkably unfazed by all the boo-ha and is friendly, frank, unpretentious, beautiful and surprisingly posh —more ex-Swiss finishing school than ex-pop star. Yet aside from the stresses of by far her biggest acting role to date, she has also had the paparazzi to contend with, as they stalked her over the break-up of her marriage to Chris Evans.

Did the intrusive lenses get to her?

"No, not at all. It's a cliche, but when you're working with a crew for eight months, you do become a family, so you are in a bubble, and I was pretty much oblivious to everything that was going on outside Doctor Who." Even so, it can't have been easy.

Evans himself recently hinted that the long separations bad a bearing on their breakup, but Billie dismisses the idea:

"I don't blame the job at all. not at all. I think whatever happened between Chris and I would have happened in the end anyway.

"I would never ever say that Doctor Who was responsible for my divorce. I think that would be stupid."

Her biggest problem technically was acting against the blank green screen which, in the finished films, contains all the special effects monsters she and the Doctor are up against. As for the stunts, Billie is confident enough to admit they are her weakest link. "I've been really terrible at stunts! I didn't realise how awful was.

"Every time I ended up trashing the set. I didn't do anything terrible — just cut my gums a few times, and broke so many props —it's a joke.

"I think it's because I'm so keen to get it tight and really go for it that I over-compensate, and then find myself in the matron's room."

Doctor Who returns out Saturday March 26, 7p BBC1 and runs for 13 weeks.

PARTY TRICK: The Dr has a Lew surprises up his sleeve

ACTION PACKED: Dr Who and Rose facing up to trouble

IN THE CLINCHES: Time Lord versus baddie