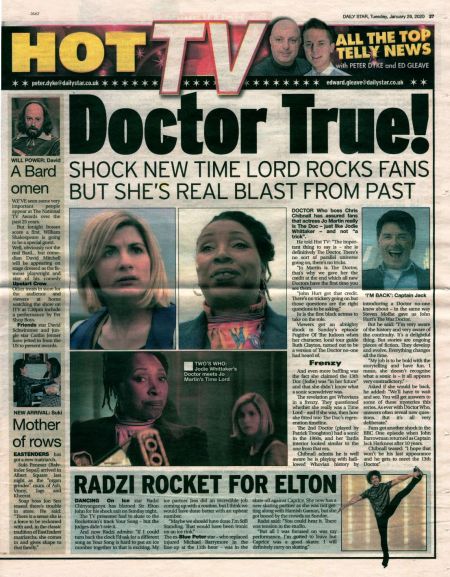 DOCTOR Who boss Chris Chibnall has assured fans that actress Jo Martin really is The Doc — just like Jodie Whittaker — and not "a trick".

He told Hot TV: "The important thing to say is - she is definitively The Doctor. There's no sort of parallel universe going on, there's no tricks.

"Jo Martin is The Doctor, that's why we gave her the credit at the end which all new Doctors have the first time you see them.

"John Hurt got that credit. There's no trickery going on but those questions are the right questions to be asking."

Jo is the first black actress to take on the role.

Viewers got an almighty shock in Sunday's episode Fugitive Of The Judoon when her character, local tour guide Ruth Clayton, turned out to be a version of The Doctor no-one had heard of.

And even more baffling was the fact she claimed the 13th Doc (Jodie) was "in her future" and that she didn't know what a sonic screwdriver was.

The revelation got Whovians in a frenzy. They questioned whether she really was a Time Lord - and if she was, then how she fitted into The Doc's regeneration timeline.

The 2nd Doctor (played by Patrick Troughton) had a sonic in the 1960s, and her Tardis interior looked similar to the one from that era.

Chibnall admits he is well aware he is playing with hall-lowed Whovian history by introducing a Doctor no-one knew about - in the same way Steven Moffat gave us John Hurt's The War Doctor.

"My job is to be bold with the storytelling and have fun. I mean, she doesn't recognise what a sonic is - it all appears very contradictory!'

Asked if she would be back, he added: "We'll have to wait and see. You will get answers to some of these mysteries this series. As ever with Doctor Who, answers often reveal new questions. But it's all very deliberate:'

Fans got another shock in the BBC One episode when John Barrowman returned as Captain Jack Harkness after 10 years.

Chibnall teased: "I hope that won't be his last appearance and he gets to meet the 13th Doctor."