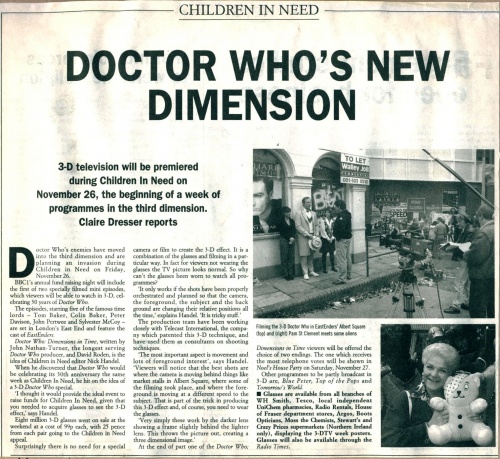 3-D television will be premiered during Children In Need on November 26, the beginning of a week of programmes in the third dimension. Claire Dresser reports

Doctor Who's enemies have moved into the third dimension and are planning an invasion during Children in Need on Friday, November 26. BBC1's annual fund raising night will include the first of two specially filmed mini episodes, which viewers will be able to watch in 3-D, celebrating 30 years of Doctor Who.

Doctor Who: Dimensions in Time, written by John Nathan-Turner, the longest serving Doctor Who producer, and David Roden, is the idea of Children in Need editor Nick Handel.

When he discovered that Doctor Who would be celebrating its 30th anniversary the same week as Children In Need, he hit on the idea of a 3-D Doctor Who special.

'I thought it would provide the ideal event to raise funds for Children In Need, given that you needed to acquire glasses to see the 3-D effect,' says Handel.

Eight million 3-D glasses went on sale at the weekend at a cost of 99p each, with 25 pence from each pair going to the Children in Need appeal.

Surprisingly there is no need for a special camera or film to create the 3-D effect. It is a combination of the glasses and filming in a particular way. In fact for viewers not wearing the glasses the TV picture looks normal. So why can't the glasses been worn to watch all programmes?

'It only works if the shots have been properly orchestrated and planned so that the camera, the foreground, the subject and the back ground are changing their relative positions all the time,' explains Handel. 'It is tricky stuff.'

The production team have been working closely with Telecast International, the company which patented this 3-D technique, and have used them as consultants on shooting techniques.

'The most important aspect is movement and lots of foreground interest', says Handel. 'Viewers will notice that the best shots are where the camera is moving behind things like market stalls in Albert Square, where some of the filming took place, and where the foreground is moving at a different speed to the subject. That is part of the trick in producing this 3-D effect and, of course, you need to wear the glasses.

'Very simply these work by the darker lens showing a frame slightly behind the lighter lens. This throws the picture out, creating a three dimensional image.'

At the end of part one of the Doctor Who; Dimensions in Time viewers will be offered the choice of two endings. The one which receives the most telephone votes will be shown in Noel's House Party on Saturday, November 27.

Other programmes to be partly broadcast in 3-D are, Blue Peter, Top of the Pops and Tomorrow's World.