Doctor Who's new mission in an alien world - America 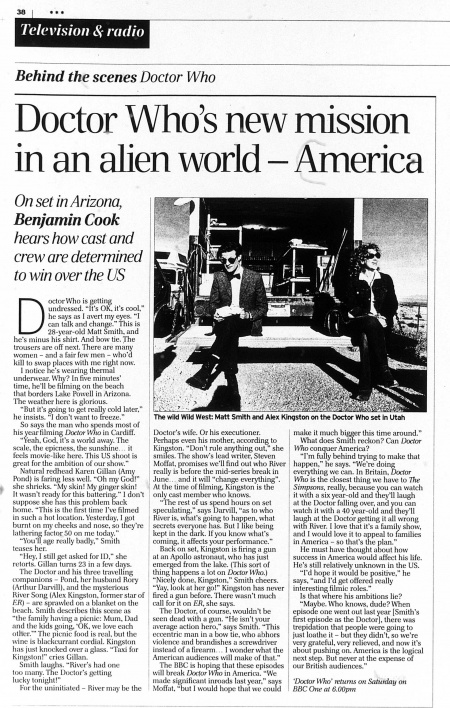 Doctor Who is getting undressed. "It's OK, it's cool," he says as I avert my eyes. "I can talk and change." This is 28-year-old Matt Smith, and he's minus his shirt. And bow tie. The trousers are off next. There are many women - and a fair few men - who'd kill to swap places with me right now.

I notice he's wearing thermal underwear. Why? In five minutes' time, he'll be filming on the beach that borders Lake Powell in Arizona. The weather here is glorious.

"But it's going to get really cold later," he insists. "I don't want to freeze."

So says the man who spends most of his year filming Doctor Who in Cardiff.

"Yeah, God, it's a world away. The scale, the epicness, the sunshine... it feels movie-like here. This US shoot is great for the ambition of our show."

Natural redhead Karen Gillan (Amy Pond) is faring less well. "Oh my God!" she shrieks. "My skin! My ginger skin! It wasn't ready for this battering." I don't suppose she has this problem back home. "This is the first time I've filmed in such a hot location. Yesterday, I got burnt on my cheeks and nose, so they're lathering factor 50 on me today."

The Doctor and his three travelling companions - Pond, her husband Rory (Arthur Darvill), and the mysterious River Song (Alex Kingston, former star of ER) - are sprawled on a blanket on the beach. Smith describes this scene as "the family having a picnic: Mum, Dad and the kids going, 'OK, we love each other.'" The picnic food is real, but the wine is blackcurrant cordial. Kingston has just knocked over a glass. "Taxi for Kingston!" cries Gillan.

Smith laughs. "River's had one too many. The Doctor's getting lucky tonight!" For the uninitiated - River may be the Doctor's wife. Or his executioner. Perhaps even his mother, according to Kingston. "Don't rule anything out," she smiles. The show's lead writer, Steven Moffat, promises we'll find out who River really is before the mid-series break in June... and it will "change everything". At the time of filming, Kingston is the only cast member who knows.

"The rest of us spend hours on set speculating," says Darvill, "as to who River is, what's going to happen, what secrets everyone has. But I like being kept in the dark. If you know what's coming, it affects your performance."

Back on set, Kingston is firing a gun at an Apollo astronaut, who has just emerged from the lake. (This sort of thing happens a lot on Doctor Who.) "Nicely done, Kingston," Smith cheers. "Yay, look at her go!" Kingston has never fired a gun before. There wasn't much call for it on ER, she says.

The Doctor, of course, wouldn't be seen dead with a gun. "He isn't your average action hero," says Smith. "This eccentric man in a bow tie, who abhors violence and brandishes a screwdriver instead of a firearm... I wonder what the American audiences will make of that."

The BBC is hoping that these episodes will break Doctor Who in America. "We made significant inroads last year," says Moffat, "but I would hope that we could make it much bigger this time around."

What does Smith reckon? Can Doctor Who conquer America?

He must have thought about how success in America would affect his life. He's still relatively unknown in the US.

"I'd hope it would be positive," he says, "and I'd get offered really interesting filmic roles."

Is that where his ambitions lie? "Maybe. Who knows, dude? When episode one went out last year [Smith's first episode as the Doctor], there was trepidation that people were going to just loathe it - but they didn't, so we're very grateful, very relieved, and now it's about pushing on. America is the logical next step. But never at the expense of our British audiences."

'Doctor Who' returns on Saturday on BBC One at 6.00pm

GRAPHIC: The wild Wild West: Matt Smith and Alex Kingston on the Doctor Who set in Utah