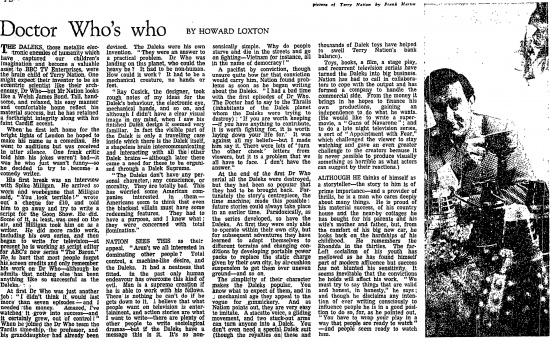 DALEKS, those metallic electronic enemies of humanity which have captured our children's imagination and become a valuable asset : to .BBC TV Enterprises, were the brain child of Terry Nation. One might expect: their inventor to be an eccentric scientist like their archenemy, Dr Who—bet Mr Nation looks like a Welsh James Bond. Tall, handsome, and relaxed, his easy manner and comfortable home reflect his material success, but he has retained a forthright integrity along with his faint Cardiff accent.

When he first left home for the bright lights of London he hoped to make his name as a comedian. He went to auditions but was received in utter silence. One frank critic told him. his jokes weren't bad—it was be who just wasn't funny—so he decided to try to . become , a comedy writer.

His first break was an interview with Spike, Milligan. He arrived so worn and woebegone that Milligan said, "You look terrible!" wrote out a cheque for £10, and told him to go away and try to write a script for the Goon Show. He did. Some of it, at, least was, used on the air, and Milligan took him on as a writer. He did more radio work, including his own series, and then began to write for television—at present he is working at script editor for ABC's new series "The Baron." He is hurt that most people forget his screen credits and only remember his work on Dr Who—although, be admits that nothing else has been anything like so successful as the Daleks.

At first Dr Who was just another job: "I didn't think it, would last more than seven episodes -– and I needed the money. Amazed, I've watched it grow into success—and it certainly grew, out of control! " When he joined the Dr Who team the Tardis time-ship, the professor, and his granddaughter had already been devised. The Daleks were his own invention. "They were an answer to a practical problem. Dr Who was landing on this planet, who could the heavy be? It had to be non-human. How could it work? It had to be a mechanical creature, no hands or feet.

"Ray Cusick, the designer, took rough notes of my ideas for the Dalek's behaviour, the electronic eye, mechanical hands, and so on, and although I didn't have a clear visual image in my mind, when I saw his finished Dalek design it seemed very familiar. In fact the visible part of the Dalek is only a travelling case inside which there is the Dalek itself, a shapeless brain intercommunicating and interacting with all the other Dalek brains — although later there came a need for these to be organised through a Dalek Supreme.

"The Daleks don't have any personal character, any conscience, or morality. They are totally bad. This has worried some American companies interested in them—Americans seem to think that even the blackest villain must have some redeeming features. They had to have a purpose, and I knew what: hey were concerned with total domination."

NATION SEES THIS as their appeal. "Aren't we all interested in dominating other people ? Total control, a machine-like desire, and the Daleks. It had a neatness, that fitted. In the past only human endeavour has overcome this kind of evil. Man is a supreme creation if he is able to work with his fellows. There' is nothing he can't do if he gets down to it. I: believe that what people want on television is entertainment, and action stories are what I want to write—there are plenty of other people to write sociological dramas—but if the Daleks have a message this is it. It's so nonsensically simple. Why do people starve and die in the streets and go on fighting—Vietnam for instance, all in the name of democracy!"

A pacifist by conviction, though unsure quite how far that conviction would carry him, Nation found problems as soon as he began writing about the Daleks. "I, had a bad time with the first episodes of Dr Who. The Doctor had to say to the Thralls (inhabitants of the Dalek planet whom the Daleks were trying to destroy) : 'If you are worth keeping —if you have anything to contribute, it is worth fighting for, it is worth laying down your life for.' It was against all my beliefs—but I made him say it. There were lots of 'turn the other cheek' letters from viewers, but it is a problem that we all have to face. I don't have the answer."

At the end of the first Dr Who serial all the Daleks were destroyed, but they had been so popular that they had to be brought back. Fortunately the story's centrepiece, the time machine; made this possible : future stories could always take place in an earlier time. Paradoxically, as the series developed, so have the Daleks. At first they were only able to operate within their own city, but for subsequent adventures they have learned to adapt themselves to different terrains and changing conditions by developing portable newer packs to replace the static charge given by their own city, by air-cushion suspension to get them over uneven ground—and so on.

The simplicity of their character makes the Daleks popular. You know what to expect of them, and in mechanical age they appeal to the vogue for gimmickery. And as Nation points out, they are very easy to imitate. A stacatto voice, a gliding movement, and two stuck-out arms can turn anyone into a Dalek. You don't even need a special; Dalek suit (though the royalties on these and thousands of Dalek toys have helped to swell Terry Nation's bank balance).

Toys, books, a film, a stage play, and recurrent television serials have turned the Daleks into big business. Nation has had to call in collaborators to cope with the output and has formed a company to handle the commercial side. From the money it brings in he hopes to 'finance his own productions, gaining an independence to do what he wants. (He would like to write a super-movie, a "Guns of Navarone" ; and to do a late night television series, a sort of "Appointment with Fear," which challenged the viewer to stay watching and gave an even greater challenge to the creators because it is never possible to produce visually something as horrible as what actors can suggest by their reactions.)

ALTHOUGH HE thinks of himself as a storyteller—the story to him is of prime importance—and a provider of thrills, he is a man who cares deeply about many things. He is proud of his material success, of his country house and the near-by cottages he has bought for his parents and his wife's mother and father, but, from the comfort of his big new car, he looks back on the hardships of his childhood. He remembers the Rhondda in the thirties. The far-Left socialism of his youth has mellowed as he has found himself part of modern affluence but success has not blunted his sensitivity. It seems inevitable that the convictions he holds will affect his work. "We must try to say things that are valid and honest, in honesty," he says ; and though he disclaims any intention of ever writing consciously to influence people he is in a good position to do so, for, as he pointed out, " You have to wisp your play in a way that people are ready to watch" —and people seem ready to watch him.