Doctor Who? Spaced-out sci-fi fans beam down for festival 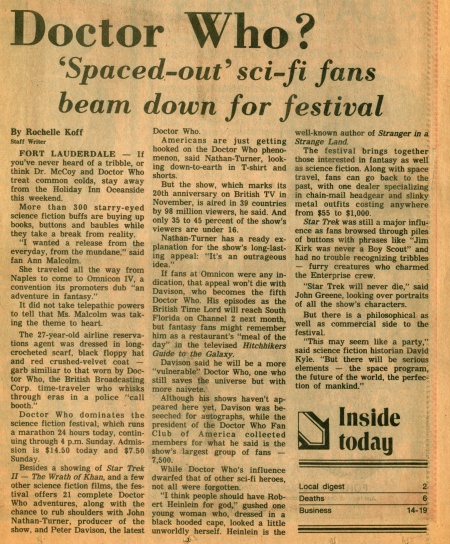 FORT LAUDERDALE — If you've never heard of a tribble, or think Dr. McCoy and Doctor Who treat common colds, stay away from the Holiday Inn Oceanside this weekend.

More than 300 starry-eyed science fiction buffs are buying up books, buttons and baubles while they take a break from reality.

"I wanted a release from the everyday, from the mundane," said fan Ann Malcolm.

She traveled all the way from Naples to come to Omnicon IV, a convention its promoters dub "an adventure in fantasy."

It did not take telepathic powers to tell that Ms. Malcolm was taking the theme to heart.

The 27-year-old airline reservations agent was dressed in long-crocheted scarf, black floppy hat and red crushed-velvet coat — garb similiar to that worn by Doctor Who, the British Broadcasting Corp. time-traveler who whisks through eras in a police "call booth."

Doctor Who dominates the science fiction festival, which runs a marathon 24 hours today, continuing through 4 p.m. Sunday. Admission is $14.50 today and $7.50 Sunday.

Besides a showing of Star Trek II — The Wrath of Khan, and a few other science fiction films, the festival offers 21 complete Doctor Who adventures, along with the chance to rub shoulders with John Nathan-Turner, producer of the show, and Peter Davison, the latest Doctor Who.

Americans are just getting hooked on the Doctor Who phenomenon, said Nathan-Turner, looking down-to-earth in T-shirt and shorts.

But the show, which marks its 20th anniversary on British TV in November, is aired in 39 countries by 98 million viewers, he said. And only 35 to 45 percent of the show's viewers are under 16.

Nathan-Turner has a ready explanation for the show's long-lasting appeal: "It's an outrageous idea."

If fans at Omnicon were any indication, that appeal won't die with Davison, who becomes the fifth Doctor Who. His episodes as the British Time Lord will reach South Florida on Channel 2 next month, but fantasy fans might remember him as a restaurant's "meal of the day" in the televised Hitchhikers Guide to the Galaxy.

Davison said he will be a more "vulnerable" Doctor Who, one who still saves the universe but with more naivete.

Although his shows haven't appeared here yet, Davison was beseeched for autographs, while the president of the Doctor Who Fan Club of America collected members for what he said is the show's largest group of fans 7,500.

While Doctor Who's influence dwarfed that of other sci-fi heroes, not all were forgotten.

"I think people should have Robert Heinlein for god," gushed one young woman who, dressed in a black hooded cape, looked a little unworldly herself. Heinlein is the well-known author of Stranger in a Strange Land.

The festival brings together those interested in fantasy as well as science fiction. Along with space travel, fans can go back to the past, with one dealer specializing in chain-mail headgear and slinky metal outfits costing anywhere from $55 to $1,000.

Star Trek was still a major influence as fans browsed through piles of buttons with phrases like "Jim Kirk was never a Boy Scout" and had no trouble recognizing tribbles — furry creatures who charmed the Enterprise crew.

"Star Trek will never die," said John Greene, looking over portraits of all the show's characters.

But there is a philosophical as well as commercial side to the festival.

"This may seem like a party," said science fiction historian David Kyle. "But there will be serious elements — the space program, the future of the world, the perfection of mankind."