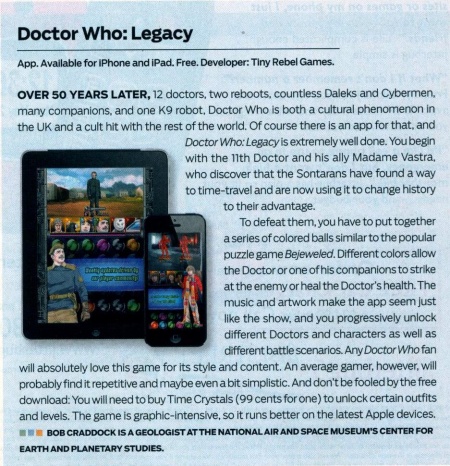 many companions, and one K9 robot, Doctor Who is both a cultural phenomenon in

the UK and a cult hit with the rest of the world. Of course there is an app for that, and Doctor Who: Legacy is extremely well done. You begin with the 11th Doctor and his ally Madame Vastra, who discover that the Sontarans have found a way to time-travel and are now using it to change history to their advantage.

To defeat them, you have to put together a series of colored balls similar to the popular puzzle game Bejeweled. Different colors allow the Doctor or one of his companions to strike at the enemy or heal the Doctor's health. The music and artwork make the app seem just like the show, and you progressively unlock different Doctors and characters as well as different battle scenarios. Any Doctor Who fan will absolutely love this game for its style and content. An average gamer, however, will probably find it repetitive and maybe even a bit simplistic. And don't be fooled by the free download: You will need to buy Time Crystals (99 cents for one) to unlock certain outfits and levels. The game is graphic-intensive, so it runs better on the latest Apple devices.