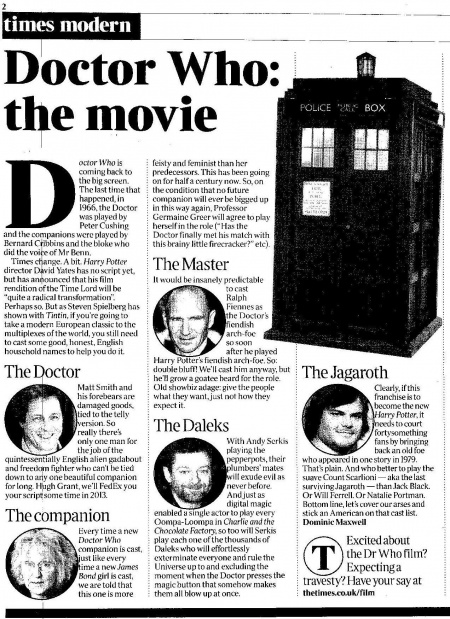 Doctor Who is coming back to the big screen. The last time that happened, in 1966, the Doctor was played by Peter Cushing and the companions were played by Bernard Cribbins and the bloke who did the voice of Mr Benn.

Times change. A bit. Harry Potter director David Yates has no script yet, but has announced that his film rendition of the Time Lord will be "quite a radical transformation". Perhaps so. But as Steven Spielberg has shown with Tintin, if you're going to take a modern European classic to the multiplexes of the world, you still need to cast some good, honest, English household names to help you do it.

The Doctor Matt Smith and his forebears are damaged goods, tied to the telly version. So really there's only one man for the job of the quintessentially English alien gadabout and freedom fighter who can't be tied down to any one beautiful companion for long. Hugh Grant, we'll FedEx you your script some time in 2013.

The companion Every time a new Doctor Who companion is cast, just like every time a new James Bond girl is cast, we are told that this one is more feisty and feminist than her predecessors. This has been going on for half a century now. So, on the condition that no future companion will ever be bigged up in this way again, Professor Germaine Greer will agree to play herself in the role ("Has the Doctor finally met his match with this brainy little firecracker?" etc).

The Master It would be insanely predictable to cast Ralph Fiennes as the Doctor's fiendish arch-foe so soon after he played Harry Potter's fiendish arch-foe. So: double bluff! We'll cast him anyway, but he'll grow a goatee beard for the role. Old showbiz adage: give the people what they want, just not how they expect it.

The Daleks With Andy Serkis playing the pepperpots, their plumbers' mates will exude evil as never before. And just as digital magic enabled a single actor to play every Oompa-Loompa in Charlie and the Chocolate Factory, so too will Serkis play each one of the thousands of Daleks who will effortlessly exterminate everyone and rule the Universe up to and excluding the moment when the Doctor presses the magic button that somehow makes them all blow up at once.

The Jagaroth Clearly, if this franchise is to become the new Harry Potter, it needs to court fortysomething fans by bringing back an old foe who appeared in one story in 1979. That's plain. And who better to play the suave Count Scarlioni - aka the last surviving Jagaroth - than Jack Black. Or Will Ferrell. Or Natalie Portman. Bottom line, let's cover our arses and stick an American on that cast list. Dominic Maxwell Excited about the Dr Who film? Expecting a travesty? Have your say at thetimes.co.uk/film