Doctor Who: what's in store

From The Doctor Who Cuttings Archive
Jump to navigationJump to search
Time Out London, April 21, 2011 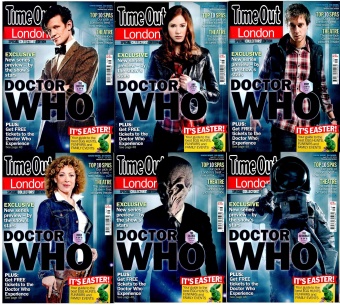 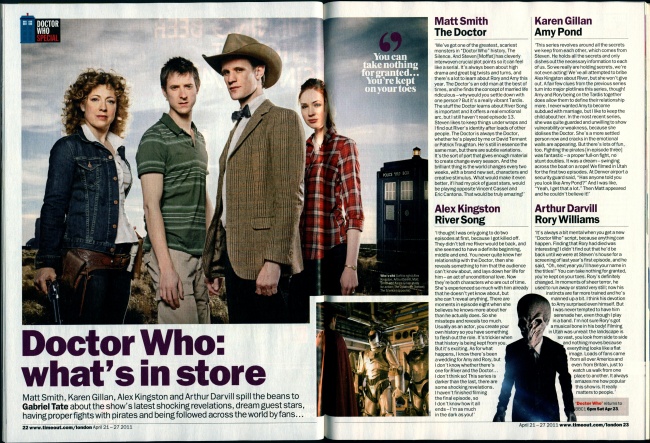 Matt Smith, Karen Gillan, Alex Kingston and Arthur Darvill spill the beans to Gabriel Tate about the show's latest shocking revelations, dream guest stars, having proper fights with pirates and being followed across the world by fans...

'We've got one of the greatest, scariest monsters in "Doctor Who" history, The Silence. And Steven [Moffat] has cleverly interwoven crucial plot points so it can feel like a serial. It's always been about high drama and great big twists and turns, and there's a lot to learn about Rory and Amy this year. The Doctor's an odd man at the best of times, and he finds the concept of married life ridiculous-why would you settle down with one person? But it's a really vibrant Tardis. The stuff the Doctor learns about River Song is important and it offers a real emotional arc, but I still haven't read episode 13. Steven likes to keep things under wraps and I find out River's identity after loads of other people. The Doctor is always the Doctor, whether he's played by me or David Tennant or Patrick Troughton. He's still in essence the same man, but there are subtle variations. It's the sort of part that gives enough material to create change every season. And the brilliant thing is the world changes every two weeks, with a brand new set, characters and creative stimulus. What would make it even better, if I had my pick of guest stars, would be playing opposite Vincent Cassel and Eric Cantona. That would be truly amazing!'

thought I was only going to do two episodes at first, because I got killed off. They didn't tell me River would be back, and she seemed to have a definite beginning, middle and end. You never quite knew her relationship with the Doctor, then she reveals something to him that the audience can't know about, and lays down her life for him - an act of unconditional love. Now they're both characters who are out of time. She's experienced so much with him already that he doesn't yet know about, but she can't reveal anything. There are moments in episode eight when she believes he knows more about her than he actually does. So she missteps and reveals too much. Usually as an actor, you create your own history so you have something to flesh out the role. It's trickier when that history is being kept from you. But it's exciting. As for what happens, I know there's been a wedding for Amy and Rory, but I don't know whether there's one for River and the Doctor... I don't think so! This series is darker than the last, there are some shocking revelations. I haven't finished filming the final episode, so I don't know how it all ends-I'm as much in the dark as you!'

'This series revolves around all the secrets we keep from each other, which comes from Steven. He holds all the secrets and only dishes out the necessary information to each of us. So we really are holding secrets, we're not even acting! We've all attempted to bribe Alex Kingston about River, but she won't give out. A fair few clues from the previous series turn into major plotlines this series, though! Amy and Rory being on the Tardis together does allow them to define their relationship more. I never wanted Amy to become subdued with marriage, but I like to keep the child about her. In the most recent series, she was quite guarded and unwilling to show vulnerability or weakness, because she idolises the Doctor. She's a more settled person now and cracks in the emotional walls are appearing. But there's lots of fun, too. Fighting the pirates [in episode three] was fantastic - a proper full-on fight, no stunt doubles. It was a dream - swinging across the boat on a rope! We filmed in Utah for the first two episodes. At Denver airport a security guard said, "Has anyone told you you look like Amy Pond?" And I was like, "Yeah, I get that a lot." Then Matt appeared and he couldn't believe it!'

'It's always a bit mental when you get a new "Doctor Who" script, because anything can happen. Finding that Rory had died was interesting! I didn't find out that he'd be back until we were at Steven's house for a screening of last year's first episode, and he said, "Oh, next year you'll have your name in the titles!" You can take nothing for granted, you're kept on your toes. Rory's definitely changed. In moments of sheer terror, he used to run away or stand very still; now his instincts are far more trained and he's manned up a bit. I think his devotion to Amy surprised even himself. But I was never tempted to have him serenade her, even though I play in a band. I'm not sure Rory's got a musical bone in his body! Filming in Utah was unreal: the landscape is so vast, you look from side to side and nothing moves because everything looks like a flat image. Loads of fans came from all over America and even from Britain, just to watch us walk from one place to another. It always amazes me how popular this show is. It really matters to people.'

Caption: Who's who (Left to right) Alex Kingston. Arthur Darvill, Matt Smith and Karen Gillan ready for action; The Cybermen (below); The Silence (opposite)