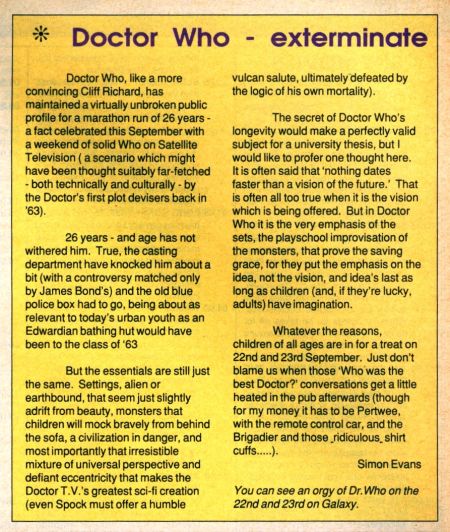 Doctor Who, like a more convincing Cliff Richard, has maintained a virtually unbroken public profile for a marathon run of 26 years a fact celebrated this September with a weekend of solid Who on Satellite Television (a scenario which might have been thought suitably far-fetched - both technically and culturally - by the Doctors first plot devisers back in '63).

26 years - and age has not withered him. True, the casting department have knocked him about a bit (with a controversy matched only by James Bond's) and the old blue police box had to go, being about as relevant to today's urban youth as an Edwardian bathing hut would have been to the class of '63

But the essentials are still just the same. Settings, alien or earthbound, that seem just slightly adrift from beauty, monsters that children will mock bravely from behind the sofa, a civilization in danger, and most importantly that irresistible mixture of universal perspective and defiant eccentricity that makes the Doctor T.V.'s greatest sci-fi creation (even Spock must offer a humble vulcan salute, ultimately defeated by the logic of his own mortality).

The secret of Doctor Who's longevity would make a perfectly valid subject for a university thesis, but I would like to profer one thought here. It is often said that 'nothing dates faster than a vision of the future.' That is often all too true when it is the vision which is being offered. But in Doctor Who it is the very emphasis of the sets, the playschool improvisation of the monsters, that prove the saving grace, for they put the emphasis on the idea, not the vision, and idea's last as long as children (and, if they're lucky, adults) have imagination.

Whatever the reasons, children of all ages are in for a treat on 22nd and 23rd September. Just don't blame us when those 'Who was the best Doctor?' conversations get a little heated in the pub afterwards (though for my money it has to be Pertwee, with the remote control car, and the Brigadier and those _ridiculous_ shirt cuffs)