Doctor Who And A Scary £10m Gamble 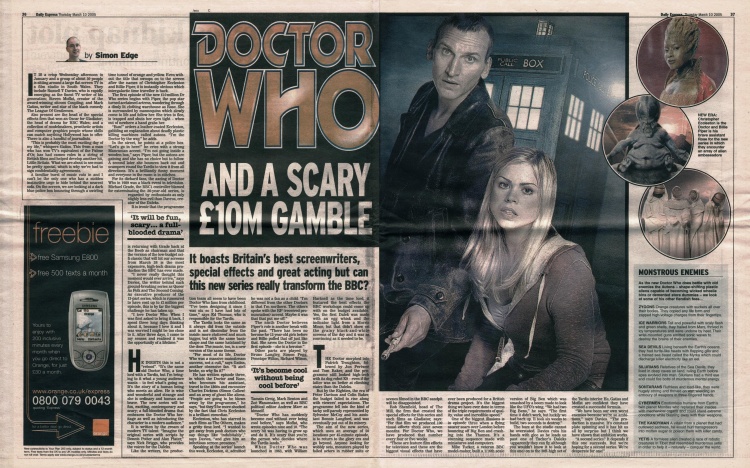 It boasts Britain's best screenwriters, special effects and great acting but can this new series really transform the BBC?

IT IS a crisp Wednesday afternoon in January and a group of about 30 people is sitting around a large flat screen TV in a film studio in South Wales. They include Russell T Davies, who is rapidly emerging as the finest TV writer of his generation; Steven Moffat, creator of the award-winning sitcom Coupling; and Mark Gatiss, writer and star of the black comedy The League Of Gentlemen.

Also present are the head of the special effects firm that won an Oscar for Gladiator; the head of drama for BBC Wales; and a collection of modelmakers, prosthetic artists and computer graphics people whose skills can match anything Hollywood has to offer. There is also a handful of journalists.

"This is probably the most exciting day of my life," whispers Gatiss. This from a man who has won TV's equivalent of the Palme d'Or, has had cameo roles in a string of British films and helped develop another hit, Little Britain. What we are about to see must be pretty special, which is why we've had to sign confidentiality agreements.

A familiar burst of music cuts in and I can't be the only one who has a sudden instinctive urge to hide behind the nearest sofa. On the screen, we are looking at a dark blue police box bouncing through a swirling time tunnel of orange and yellow. Even without the title that swoops on to the screen after the names of Christopher Eccleston and Billie Piper, it is instantly obvious which intergalactic time traveller is back.

The first episode of the new £10 million Dr Who series begins with Piper, the pop star turned acclaimed actress, wandering through a dimly lit clothing warehouse as Rose. She is surrounded by mannequins which slowly come to life and follow her. She tries to flee, is trapped and shuts her eyes tight - when out of nowhere a hand grabs her.

"Run!" orders a leather-coated Eccleston, gabbling an explanation about deadly plastic killing machines called autons. "I'm the Doctor by the way," he adds.

In the street, he points at a police box. "Let's go in here!" he cries with a strong Mancunian accent. "I'm not going inside a wooden box," says Piper, but the autons are gaining and she has no choice but to follow. A second later she bounces back out and scampers round the Tardis to view it from all directions. It's a brilliantly funny moment and everyone in the room is in stitches.

For its diehard fans, the axeing of Doctor Who in 1989 was a black event in television. Michael Grade, the BBC1 controller blamed for exterminating the 26-year-old series, is regarded by enthusiasts as only slighly less evil than Davros, creator of the Daleks.

It is ironic that the programme is returning with Grade back at the Beeb as chairman and that the version of the low-budget sci-fi classic that will hit our screens from March 26 is the most expensive, high-tech drama production the BBC has ever made.

"I never really thought this moment would ever arrive," says Davies, the writer behind such ground-breaking series as Queer As Folk and The Second Coming. As executive producer of the 13-part series, which is rumoured to have cost up to £1 million per episode, this is by far the biggest challenge he has taken up.

"I love Doctor Who. When I was first asked to bring it back, I spent three long days thinking about it, because I love it and I was worried I might be too close to it. After three days, I came to my senses and realised it was the opportunity of a lifetime."

HE INSISTS this is not a "reboot". "It's the same old Doctor Who, a time lord with a Tardis, but I'm bringing to it what a young audience wants - to feel what's going on. It's the story of a human being who meets an alien. He is wise and wonderful and strange and she is ordinary and human and brave. The new series will be fun, exciting, contemporary and scary; a full-blooded drama that embraces the Doctor Who heritage as well as introducing the character to a modern audience."

It is written by the cream of modern TV talent. "Imagine the original series with scripts by Dennis Potter and Alan Plater," says Nick Briggs, who provides the voices for the Daleks.

Like the writers, the production team all seem to have been Doctor Who fans from childhood. "I've been designing it since I was six so I have had lots of time," says Ed Thomas, who is responsible for the Tardis.

The Tardis looks the same as it always did from the outside and is not dissimilar from the inside: more cluttered and much bigger, but with the same basic shape and the same hatstand by the door. The music, too, is a new version of the same theme.

"For most of its life, Doctor Who was a massive mainstream success, not a cult," says Gatiss, another obsessive fan. "It ain't broke, so why fix it?"

He has written episode three, in which the Doctor and Rose, who becomes his assistant, travel to the 1860s and encounter Charles Dickens (Simon Callow) and an army of ghost-like aliens. "People are going to be blown away by the programme," he says, "but they'll be more shocked by the fact that Chris Eccleston is a brilliant comedian."

Eccleston, who has starred in such films as The Others, makes a gritty time lord. "I wanted to get away from posh doctors who say things like 'indubitably'," says Davies, "and give him an infectious screen presence."

Speaking at the series' launch this week, Eccleston, 41, admitted he was not a fan as a child. "I'm different from the other Doctors in that I'm northern. The others spoke with the RP (received pronunciation) accent. Maybe it was that that put me off."

The ninth Doctor believes Piper's role is another break with the past. "There has been no heroine for 12-year-old girls before and Billie pulled that off just like that. She saves the Doctor in the first episode - she is a heroine."

"Doctor Who has suddenly become cool without ever being cool before," says Moffat, who wrote episodes nine and 10. "The scary bit was having to grow up and do it. It's scary that you're the person who decides where the Tardis lands."

When Doctor Who was launched in 1963, with William Hartnell as the time lord, it featured the best effects the BBC workshops could come up with on the budget available. Yes, the first Dalek was made with an egg whisk and the indicator light from a Morris Minor, but that didn't show on the grainy black-and-white screens of the day and it was as convincing as it needed to be.

THE Doctor morphed into Patrick Troughton, followed by Jon Pertwee and Tom Baker, and the programme still looked high-tech with its dog robot K9 - even if the latter was no better at climbing stairs than the Daleks.

But by the Eighties, the era of Peter Davison and Colin Baker, the budget failed to rise along with viewers' expectations. The programme fell into the kind of tacky self-parody represented by Sylvester McCoy and his assistant Bonnie Langford, and was eventually put out of its misery.

The aim of the new series, which uses an average of 50 locations per 45-minute episode, is to return to the glory era and go beyond. Anyone looking for wobbly sets, monsters played by failed actors in rubber suits or scenes filmed in the BBC sandpit will be disappointed.

Rob Shenfield, head of The Mill, the firm that created the special effects for this series and such films as Gladiator, says: "For that film we produced 100 visual effects shots over seven months. For Doctor Who, we have produced that number every four or five weeks.

"These are feature film effects for television and these are the biggest visual effects that have ever been produced for a British drama project. It's the biggest thing we have ever done in terms of the triple requirements of quality, value and incredible speed."

One of the biggest illusions is in episode three when a flying saucer soars over London before bouncing off Big Ben and crashing into the Thames. It's a stunning sequence made with miniatures and computers.

Mike Tucker, a veteran BBC model-maker, built a 1/16th scale version of Big Ben which was smashed by a boom made to look like the UFO's wing. "We had two Big Bens," he says. "The first time it didn't work, but luckily we had back-up. It took six weeks to build, two seconds to destroy"

The buzz at the studio cannot be overstated. Davies rubs his hands with glee as he leads us past one of Tucker's Daleks (apparently they can fly, although you wouldn't know it to look at this one) on to the 30ft-high set of the Tardis interior. He, Gatiss and Moffat are confident they have created a successful formula.

"We have been our own worst enemies because we're so ambitious," says Davies. "The production is massive. It's constant plate spinning and it has hit us all by surprise but I think we have shown that ambition works.

"A second series? It depends if this one succeeds. But we're hoping for a second series. We're desperate for one!"

As the new Doctor Who does battle with old enemies the Autons shape-shifting plastic aliens capable of becoming wicked wheelie bins or demented store dummies — we look at some of his other fiendish foes...

ZYGONS Orange creatures with suckers all over their bodies. They copied any life form and zapped high-voltage charges from their fingertips.

ICE WARRIORS Tall and powerful with scaly flesh and green shells, they hailed from Mars, thrived in icy temperatures and were undone by heat. Their wrist-mounted guns emitted sonic waves to destroy the brains of their enemies.

SEA DEVILS Living beneath the Earth's oceans, they had turtle-like heads with flapping gills and a trained sea beast called the Myrka which could discharge killer electricity like an eel.

SILURIANS Relatives of the Sea Devils, they lived in deep caves on land, ruling Earth before apes evolved into man. Silurians had a third eye and could fire bolts of murderous mental energy.

SONTARANS Ruthless and toad-like, they were hugely strong and thrived on war, wielding an armoury of weapons in three-fingered hands.

CYBERMEN Emotionless humans from Earth's twin planet Mondas who replaced their insides with mechanical organs and could stand extreme conditions while blasting away with their weapons.

THE KANDYMAN A villain from a planet that had outlawed sadness, he would hurl transgressors into molten sugar or poison them with killer candy.

YETIS A formless alien created a race of robotic creatures in Tibet that resembled murderous yetis in order to help it — naturally — conquer the world.

Caption: NEW ERA: Christopher Eccleston is the Doctor and Billie Piper is his brave assistant Rose for the new series in which they encounter an array of alien ambassadors