Doctor Who Reinvents the Christmas Classic 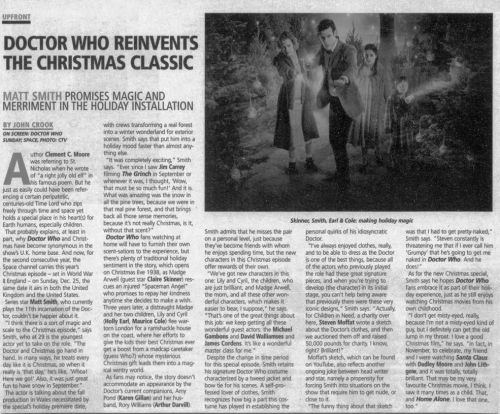 MATT SMITH PROMISES MAGIC AND MERRIMENT IN THE HOLIDAY INSTALLATION

ON SCREEN: DOCTOR WHO

Author Clement C. Moore was referring to St. Nicholas when he wrote of "a right jolly old elf" in his famous poem. But he just as easily could have been referencing a certain peripatetic, centuries-old Time Lord who zips freely through time and space yet holds a special place in his heart(s) for Earth humans, especially children. That probably explains, at least in part, why Doctor Who and Christmas have become synonymous in the show's U.K. home base. And now, for the second consecutive year, the Space channel carries this year's Christmas episode — set in World War II England — on Sunday, Dec. 25, the same date it airs in both the United Kingdom and the United States. Series star Matt Smith, who currently plays the 11th incarnation of the Doctor, couldn't be happier about it. "I think there is a sort of magic and scale to the Christmas episode," says Smith, who at 29 is the youngest actor yet to take on the role. "The Doctor and Christmas go hand in hand. In many ways, he treats every day like it is Christmas, so when it really is 'that day,' he's like, 'Whoa! Here we go!' Also, it was just great fun to have snow in September." The actor is talking about the fall production in Wales necessitated by the special's holiday premiere date, with crews transforming a real forest into a winter wonderland for exterior scenes. Smith says that put him into a holiday mood faster than almost anything else.

"It was completely exciting," Smith says. "Ever since I saw Jim Carrey filming The Grind) in September or whenever it was, I thought, 'Wow, that must be so much fun!' And it is. What was amazing was the snow in all the pine trees, because we were in that real pine forest, and that brings back all those sense memories, because it's not really Christmas, is it, without that scent?"

Doctor Who fans watching at home will have to furnish their own scent-sations to the experience, but there's plenty of traditional holiday sentiment in the story, which opens on Christmas Eve 1938, as Madge Arwell (guest star Claire Skinner) rescues an injured "Spaceman Angel" who promises to repay her kindness anytime she decides to make a wish. Three years later, a distraught Madge and her two children, Lily and Cyril (Holly Earl, Maurice Cole) flee war-torn London for a ramshackle house on the coast, where her efforts to give the kids their best Christmas ever get a boost from a madcap caretaker (guess Who?) whose mysterious Christmas gift leads them into a magical wintry world.

As fans may notice, the story doesn't accommodate an appearance by the Doctor's current companions, Amy Pond (Karen Gillan) and her husband, Rory Williams (Arthur Darvill). Smith admits that he misses the pair on a personal level, just because they've become friends with whom he enjoys spending time, but the new characters in this Christmas episode offer rewards of their own.

"We've got new characters in this one: Lily and Cyril, the children, who are just brilliant, and Madge Arwell, the mom, and all these other wonderful characters, which makes it easier to bear, I suppose," he says. "That's one of the great things about this job: we keep getting all these wonderful guest actors: the Michael Gambons and David Walliamses and James Cordens. It's like a wonderful master class for me."

Despite the change in time period for this special episode, Smith retains his signature Doctor Who costume characterized by a tweed jacket and bow tie for his scenes. A self-professed lover of clothes, Smith recognizes how big a part this costume has played in establishing the personal quirks of his idiosyncratic Doctor.

"I've always enjoyed clothes, really, and to be able to dress as the Doctor is one of the best things, because all of the actors who previously played the role had these great signature pieces, and when you're trying to develop (the character) in its initial stage, you can't help being aware that previously there were these very iconic designs," Smith says. "Actually, for Children in Need, a charity over here, Steven Moffat wrote a sketch about the Doctor's clothes, and then we auctioned them off and raised 50,000 pounds for charity. I know, right? Brilliant!"

Moffat's sketch, which can be found on YouTube, also reflects another ongoing joke between head writer and star, namely a propensity for forcing Smith into situations on the show that require him to get nude, or close to it.

"The funny thing about that sketch was that I had to get pretty naked," Smith says. "Steven constantly is threatening me that if I ever call him 'Grumpy' that he's going to get me naked in Doctor Who. And he does!"

As for the new Christmas special, Smith says he hopes Doctor Who fans embrace it as part of their holiday experience, just as he still enjoys watching Christmas movies from his own childhood.

"I don't get misty-eyed, really, because I'm not a misty-eyed kind of guy, but I definitely can get the old lump in my throat. I love a good Christmas film," he says. "In fact, in November, to celebrate, my friend and I were watching Santa Claus with Dudley Moore and John Lithgow, and it was totally, totally brilliant. That may be my very favourite Christmas movie, I think. I saw it many times as a child. That, and Home Alone. I love that one, too."