Doctor Who arrives in modern times. And it works 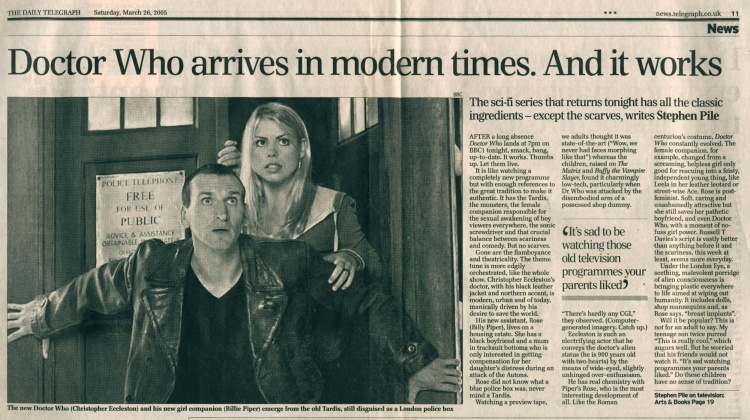 The sci-fi series that returns tonight has all the classic ingredients — except the scarves, writes Stephen Pile

AFTER a long absence Doctor Who lands at 7pm on BBC1 tonight, smack, bang, up-to-date. It works. Thumbs up. Let them live.

It is like watching a completely new programme but with enough references to the great tradition to make it authentic. It has the Tardis, the monsters, the female companion responsible for the sexual awakening of boy viewers everywhere, the sonic screwdriver and that crucial balance between scariness and comedy. But no scarves.

Gone are the flamboyance and theatricality. The theme tune is more edgily orchestrated, like the whole show. Christopher Eccleston's doctor, with his black leather jacket and northern accent, is modern, urban and of today, manically driven by his desire to save the world.

His new assistant, Rose (Billy Piper), lives on a housing estate. She has a black boyfriend and a mum in tracksuit bottoms who is only interested in getting compensation for her daughter's distress during an attack of the Autons.

Rose did not know what a blue police box was, never mind a Tardis.

Watching a preview tape, we adults thought it was state-of-the-art ("Wow, we never had faces morphing like that") whereas the children, raised on The Matrix and Buffy the Vampire Slayer, found it charmingly low-tech, particularly when Dr Who was attacked by the disembodied arm of a possessed shop dummy.

"There's hardly any CGI," they observed. (Computer-generated imagery. Catch up.)

Eccleston is such an electrifying actor that he conveys the doctor's alien status (he is 900 years old with two hearts) by the means of wide-eyed, slightly unhinged over-enthusiasm.

He has real chemistry with Piper's Rose, who is the most interesting development of all. Like the Roman centurion's costume, Doctor Who constantly evolved. The female companion, for example, changed from a screaming, helpless girl only good for rescuing into a feisty, independent young thing, like Leela in her leather leotard or street-wise Ace. Rose is post-feminist. Soft, caring and unashamedly attractive but she still saves her pathetic boyfriend, and even Doctor Who, with a moment of no-fuss girl power. Russell T Davies's script is vastly better than anything before it and the scariness, this week at least, seems more everyday.

Under the London Eye, a seething, malevolent porridge of alien consciousness is bringing plastic everywhere to life aimed at wiping out humanity. It includes dolls, shop mannequins and, as Rose says, "breast implants".

Will it be popular? This is not for an adult to say. My teenage son twice purred "This is really cool," which augurs well. But he worried that his friends would not watch it. "It's sad watching programmes your parents liked." Do these children have no sense of tradition?

Caption: The new Doctor Who (Christopher Eccleston and his new girl companion (Billie Piper) emerge from the old Tardis, still disguised as a London police box