Doctor Who defeats the Met in battle for Tardis 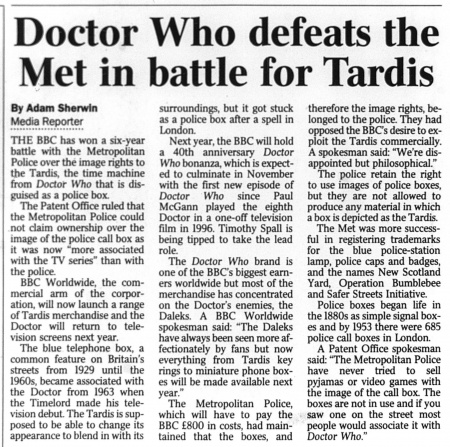 THE BBC has won a six-year battle with the Metropolitan Police over the image rights to the Tardis, the time machine from Doctor Who that is disguised as a police box.

The Patent Office ruled that the Metropolitan Police could not claim ownership over the image of the police call box as it was now more associated with the TV series" than with the police.

BBC Worldwide, the commercial arm of the corporation, will now launch a range of Tardis merchandise and the Doctor will return to television screens next year.

The blue telephone box, a common feature on Britain's streets from 1929 until the 1960s, became associated with the Doctor from 1963 when the Timelord made his television debut. The Tardis is supposed to be able to change its appearance to blend in with its surroundings, but it got stuck as a police box after a spell in London.

Next year, the BBC will hold a 40th anniversary Doctor Who bonanza, which is expected to culminate in November with the first new episode of Doctor Who since Paul McGann played the eighth Doctor in a one-off television film in 1996. Timothy Spall is being tipped to take the lead role.

The Doctor Who brand is one of the BBC's biggest earners worldwide but most of the merchandise has concentrated on the Doctor's enemies, the Daleks. A BBC Worldwide spokesman said: "The Daleks have always been seen more affectionately by fans but now everything from Tardis key rings to miniature phone boxes will be made available next year."

The Metropolitan Police, which will have to pay the BBC £800 in costs, had maintained that the boxes, and therefore the image rights, belonged to the police. They had opposed the BBC's desire to exploit the Tardis commercially. A spokesman said: "We're disappointed but philosophical."

The police retain the right to use images of police boxes, but they are not allowed to produce any material in which a box is depicted as the Tardis.

The Met was more successful in registering trademarks for the blue police-station lamp, police caps and badges, and the names New Scotland Yard, Operation Bumblebee and Safer Streets Initiative.

Police boxes began life in the 1880s as simple signal boxes and by 1953 there were 685 police call boxes in London.

A Patent Office spokesman said: "The Metropolitan Police have never tried to sell pyjamas or video games with the image of the call box. The boxes are not in use and if you saw one on the street most people would associate it with Doctor Who."