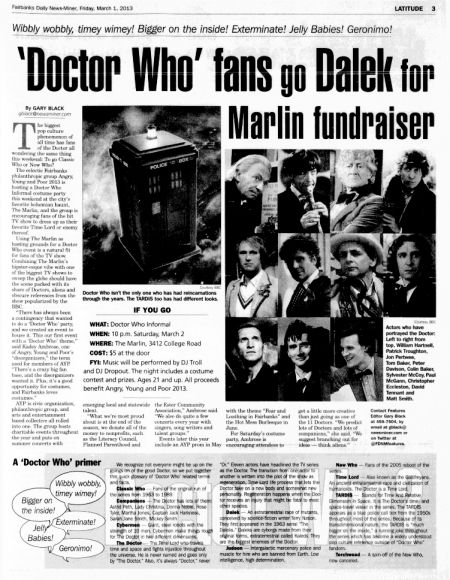 The biggest pop culture phenomenon of all time has fans of the Doctor all wondering the same thing this weekend: To go Classic Who or New Who?

The eclectic Fairbanks philanthropic group Angry, Young and Poor 2013 is hosting a Doctor Who Informal costume party this weekend at the city's favorite bohemian haunt, The Marlin, and the group is encouraging fans of the hit TV show to dress up as their favorite Time Lord or enemy thereof.

Using The Marlin as hosting grounds for a Doctor Who event is a natural fit for fans of the TV show. Combining The Marlin's hipster-esque vibe with one of the biggest TV shows to sweep the globe should have the scene packed with its share of Doctors, aliens and obscure references from the show popularized by the BBC.

"There has always been a contingency that wanted to do a 'Doctor Who' party, and we created an event to house it. This our first event with a 'Doctor Who' theme," said Kadey Ambrose, one of Angry, Young and Poor's "disorganizers," the term used for members of AYP "There's a crazy big fan base, and the disorganizers wanted it. Plus, it's a good opportunity for costumes, and Fairbanks loves costumes."

AYP is civic organization, philanthropic group, and arts and entertainment based collective all rolled into one. The group hosts charitable events throughout the year and puts on summer concerts with emerging local and statewide talent.

"What we're most proud about is at the end of the season, we donate all of the money to nonprofits, such as the Literacy Council, Planned Parenthood and the Ester Community Association," Ambrose said. "We also do quite a few concerts every year with singers, song writers and talent groups."

Events later this year include an AYP prom in May with the theme "Fear and Loathing in Fairbanks" and the Hot Mess Burlesque in June.

For Saturday's costume party, Ambrose is encouraging attendees to get a little more creative than just going as one of the 11 Doctors. "We predict lots of Doctors and lots of companions," she said. "We suggest branching out for ideas — think aliens."

WHAT: Doctor Who Informal

FYI: Music will be performed by DJ Troll and DJ Dropout. The night includes a costume contest and prizes. Ages 21 and up. All proceeds benefit Angry, Young and Poor 2013.

Caption: Doctor Who isn't the only one who has had reincarnations through the years. The TARDIS too has had different looks.

A 'Doctor Who' primer

We recognize not everyone might be up on the goings-on of the good Doctor, so we put together this quick glossary of 'Doctor Who' related terms and facts.

Cybermen -- Giant, steel robots with the strength of 10 men. Cybermen make things rough for The Doctor in two different dimensions.

The Doctor - The Time Lord who travels time and space and fights injustice throughout the universe. He is never named and goes only by "The Doctor." Also, it's always "Doctor," never "Dr." Eleven actors have headlined the TV series as the Doctor. The transition from one actor to another is written into the plot of the show as regeneration, Time Lord life process that lets the Doctor take on a new body and somewhat new personality. Regeneration happens when the Doctor receives an injury that might be fatal to most other species.

Dalek - An extraterrestrial race of mutants. conceived by science-fiction writer Terry Nation. They first appeared in the 1963 serial "The Daleks." Daleks are cyborgs made from their original forms. extraterrestrial called Kaleds. They are the biggest enemies of the Doctor.

Time Lord -Also known as the Gallifreyans. An ancient extraterrestrial race and civilization of humanoids. The Doctor is a Time Lord.

TARDIS - Stands for Time And Relative Dimension In Space. It is The Doctor's time- and space-travel vessel in the series. The TARDIS appears as a blue police call box from the 1950s throughout most of the series. Because of its transdimensional nature, the TARDIS is -much bigger on the inside," a running joke throughout the series which has become a widely understood pop culture reference outside of "Doctor Who" fandom.

Torchwood — A spin-off of the New Who, now canceled.