Doctor Who gets 10th face 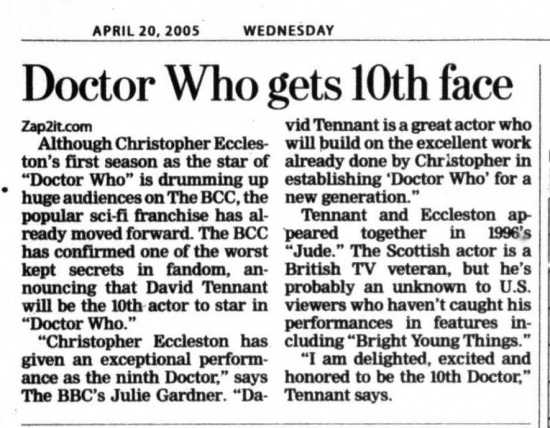 Although Christopher Eccleston's first season as the star of "Doctor Who" is drumming up huge audiences on The BCC, the popular sci-fi franchise has already moved forward. The BCC has confirmed one of the worst kept secrets in fandom, announcing that David Tennant will be the 10th actor to star in "Doctor Who."

"Christopher Eccleston has given an exceptional performance as the ninth Doctor," says The BBC's Julie Gardner. "David Tennant is a great actor who will build on the excellent work already done by Christopher in establishing 'Doctor Who' for a new generation."

Tennant and Eccleston appeared together in 1996's "Jude." The Scottish actor is a British TV veteran, but he's probably an unknown to U.S. viewers who haven't caught his performances in features including "Bright Young Things."

"I am delighted, excited and honored to be the 10th Doctor," Tennant says.