Doctor Who gets scary — well, sort of 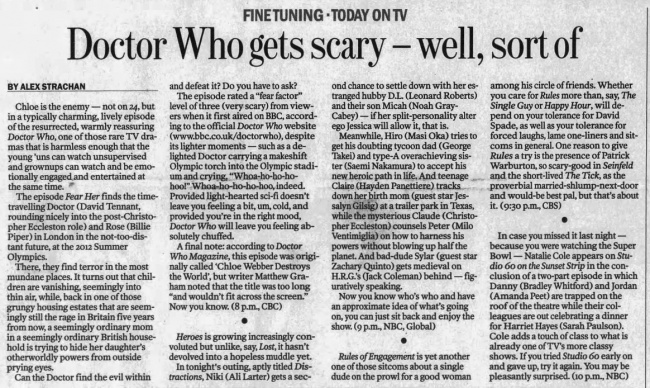 Chloe is the enemy — not on 24, but in a typically charming, lively episode of the resurrected, warmly reassuring Doctor Who, one of those rare TV dramas that is harmless enough that the young 'uns can watch unsupervised and grownups can watch and be emotionally engaged and entertained at the same time.

The episode Fear Her finds the time-travelling Doctor (David Tennant, rounding nicely into the post-Christopher Eccleston role) and Rose (Billie Piper) in London in the not-too-distant future, at the 2012 Summer Olympics.

There, they find terror in the most mundane places. It turns out that children are vanishing, seemingly into thin air, while, back in one of those grungy housing estates that are seemingly still the rage in Britain five years from now, a seemingly ordinary mom in a seemingly ordinary British household is trying to hide her daughter's otherworldly powers from outside prying eyes.

Can the Doctor find the evil within and defeat it? Do you have to ask?

The episode rated a "fear factor" level of three (very scary) from viewers when it first aired on BBC, according to the official Doctor Who website (www.bbc.co.uk/doctorwho), despite its lighter moments — such as a delighted Doctor carrying a makeshift Olympic torch into the Olympic stadium and crying, "Whoa-ho-ho-ho-hoo!" Whoa-ho-ho-ho-hoo, indeed. Provided light-hearted sci-fi doesn't leave you feeling a bit, um, cold, and provided you're in the right mood, Doctor Who will leave you feeling absolutely chuffed.

A final note: according to Doctor Who Magazine, this episode was originally called 'Chloe Webber Destroys the World', but writer Matthew Graham noted that the title was too long "and wouldn't fit across the screen." Now you know. (8 p.m, CBC)