Doctor Who is about inclusion 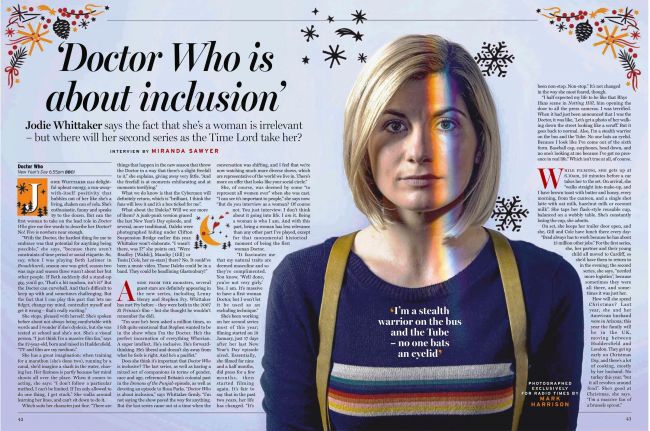 Jodie Whittaker says the fact that she's a woman is irrelevant - but where will her second series as the Time Lord take her?

JODIE WHITTAKER HAS delightful upbeat energy, a run-away-with-itself positivity that bubbles out of her like she's a living, shaken can of cola. She's enthusiastic, funny and speaks 19 to the dozen. But can the first woman to take on the lead role in Doctor Who give me five words to describe her Doctor? No! Five is nowhere near enough.

"With the Doctor, the hardest thing for me to embrace was that potential for anything being possible," she says, "because there aren't constraints of time period or social etiquette. So, say, when I was playing Beth Latimer in Broadchurch, season one was grief, season two was rage and season three wasn't about her but other people. If Beth suddenly did a stand-up gig, you'd go, 'That's a bit random, isn't it?' But the Doctor can curveball. And that's difficult to keep up with and sometimes challenging. But the fact that I can play this part that lets me fidget, change my mind, contradict myself and get it wrong - that's really exciting?'

She stops, pleased with herself. She's spoken before about not always being comfortable with words and I wonder if she's dyslexic, but she was tested at school and she's not. She's a visual person. "I just think I'm a massive film fan?' says the 37-year-old, born and raised in Huddersfield. "TV and film are my medium?'

She has a great imagination: when training for a marathon (she's done two), running by a canal, she'd imagine a shark in the water, chasing her. Her fizziness is partly because her mind shoots all over the place. When it comes to acting, she says: "I don't follow a particular method, I can't be limited. If I'm only allowed to do one thing, I get stuck." She walks around learning her lines, and can't sit down to do it.

Which suits her character just fine. "There are things that happen in the new season that throw the Doctor in a way that there's a slight freefall to it," she explains, giving away very little. 'And the freefall is at moments exhilarating and at moments terrifying."

What we do know is that the Cybermen will definitely return, which is "brilliant, I think the fans will love it and it's a box ticked for me".

What about the Daleks? Will we see more of them? A junk-punk version graced the last New Year's Day episode, and several, more traditional, Daleks were . photographed hiding under Clifton Suspension Bridge earlier this year. S Whittaker won't elaborate. "I wasn't it* there, was I?" she points out. "Were Bradley [Walsh], Mandip [Gill] or Tosin [Cole, her co-stars] there? No. It could've been a music video. Those Daleks could be in a band. They could be headlining Glastonbury!"

ASIDE FROM THE monsters, several guest stars are definitely appearing in the new series, including Lenny Henry and Stephen Fry. Whittaker has met Fry before - they were both in the 2007 St Trinian's film - but she thought he wouldn't remember (he did).

"I'm sure he's been asked a million times, so I felt quite emotional that Stephen wanted to be in the show when I'm the Doctor. He's the perfect incarnation of everything Whovian. A super intellect. He's inclusive. He's forward-thinking. He's liberal and doesn't shy away from what he feels is right. And he's a pacifist?'

Does she think it's important that Doctor Who is inclusive? The last series, as well as having a mixed set of companions in terms of gender, race and age, referenced Britain's colonial past in the Demons of the Punjab episode, as well as devoting an episode to Rosa Parks. "Doctor Who is about inclusion," says Whittaker firmly. "I'm not saying the show paved the way for anything. But the last series came out at a time when the conversation was shifting, and I feel that we're now watching much more diverse shows, which are representative of the world we live in. There's more on offer that looks like your social circle."

She, of course, was deemed by some "to represent all women ever" when she was cast. "I can see it's important to people," she says now. "But do you interview as a woman? Of course not. You just interview. I don't think about it going into life. I am it. Being a woman is who I am. And with this part, being a woman has less relevance than any other part I've played, except for that monumental historical 4.4 moment of being the first woman Doctor.

"It fascinates me that my natural traits are deemed masculine and so they're complimented. You know, 'Well done, you're not very girly.' Yes, I am. It's massive to have a first woman Doctor, but I won't let it be used as an excluding technique?"

She's been working on her second series most of this year; filming started on 18 January, just 17 days after her last New Year's Day episode aired. Essentially, she filmed for nine and a half months, did press for a few months, then started filming again. It's fair to say that in the past two years, her life has changed. "It's been non-stop. Non-stop." It's not changed in the way she most feared, though.

"I half expected my life to be like that Rhys Ifans scene in Notting Hill, him opening the door to all the press cameras. I was terrified. When it had just been announced that I was the Doctor, it was like, 'Let's get a photo of her walking down the street looking like a scruff: But it goes back to normal. Also, I'm a stealth warrior on the bus and the Tube. No one bats an eyelid. Because I look like I've come out of the sixth form. Baseball cap, earphones, head down, and no one's looking at me because I've got no presence in real life:' Which isn't true at all, of course.

WHILE FILMING, SHE gets up at 6.10am, 20 minutes before a car takes her to the set. On arrival, she "walks straight into make-up, and I have brown toast with butter and honey, every morning, from the canteen, and a single shot latte with oat milk, hazelnut milk or coconut milk". She taps her flask-style reusable cup, balanced on a wobbly table. She's constantly losing the cup, she admits.

On set, she keeps her trailer door open, and she, Gill and Cole have lunch there every day: "Brad always has to work because he has about 15 million other jobs." For the first series, she, her partner and their young child all moved to Cardiff, so she'd have them to return to in the evening; the second series, she says, "needed more logistics", because sometimes they were all there, and sometimes it was just her.

How will she spend Christmas? Last year, she and her American husband were in Arizona; this year the family will be in the UK, moving between Huddersfield and London. They get up early on Christmas Day, and there's a lot of cooking, mostly by her husband. No turkey this year, "but it all revolves around food". She's good at Christmas, she says. "I'm a massive fan of a brussels sprout?"