Doctor Who is the most self-confident programme on television 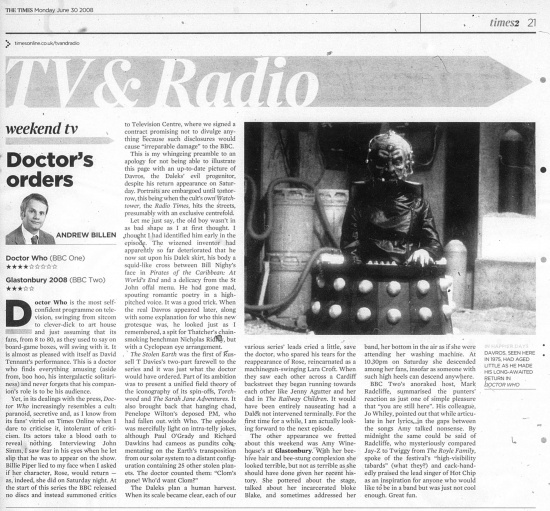 Doctor Who is the most self-confident programme on television, swinging from sitcom to clever-dick to art house and just assuming that its fans, from 8 to 80, as they used to say on board-game boxes, will swing with it. It is almost as pleased with itself as David Tennant's performance. This is a doctor who finds everything amusing (aside from, boo hoo, his intergalactic solitariness) and never forgets that his companion's role is to be his audience.

Yet, in its dealings with the press, Doctor Who increasingly resembles a cult: paranoid, secretive and, as I know from its fans' vitriol on Times Online when I dare to criticise it, intolerant of criticism. Its actors take a blood oath to reveal nothing. Interviewing John Simm, I saw fear in his eyes when he let slip that he was to appear on the show. Billie Piper lied to my face when I asked if her character, Rose, would return as, indeed, she did on Saturday night. At the start of this series the BBC released no discs and instead summoned critics to Television Centre, where we signed a contract promising not to divulge anything because such disclosures would cause "irreparable damage" to the BBC.

This is my whingeing preamble to an apology for not being able to illustrate this page with an up-to-date picture of Davros, the Daleks' evil progenitor, despite his return appearance on Saturday. Portraits are embargoed until tomorrow, this being when the cult's own Watchtower, the Radio Times, hits the streets, presumably with an exclusive centrefold.

Let me just say, the old boy wasn't in as bad shape as I at first thought. I thought I had identified him early in the episode. The wizened inventor had

apparently so far deteriorated that he now sat upon his Dalek skirt, his body a squid-like cross between Bill Nighy's face in Pirates of the Caribbean: At World's End and a delicacy from the St John offal menu. He had gone mad, spouting romantic poetry in a high-pitched voice. It was a good trick. When the real Davros appeared later, along with some explanation for who this new grotesque was, he looked just as I remembered, a spit for Thatcher's chain-smoking henchman Nicholas Ridley, but with a Cyclopean eye arrangement.

The Stolen Earth was the first of Russell T Davies's two-part farewell to the series and it was just what the doctor would have ordered. Part of its ambition was to present a unified field theory of the iconography of its spin-offs, Torchwood and The Sarah Jane Adventures. It also brought back that hanging chad, Penelope Wilton's deposed PM, who had fallen out. with Who. The episode was mercifully light on intra-telly jokes, although Paul O'Grady and Richard Dawkins had cameos as pundits commenting on the Earth's transposition from our solar system to a distant configuration containing 25 other stolen planets. The doctor counted them: "Clom's gone! Who'd want Clom?"

The Daleks plan a human harvest. When its scale became clear, each of our various series' leads cried a little, save the doctor, who spared his tears for the reappearance of Rose, reincarnated as a machinegun-swinging Lara Croft. When they saw each other across a Cardiff backstreet they began running towards each other like Jenny Agutter and her dad in The Railway Children. It would have been entirely nauseating had a Dal& not intervened terminally. For the first time for a while, I am actually looking forward to the next episode.

DAVROS, SEEN HERE IN 1975, HAD AGED LITTLE AS HE MADE HIS LONG-AWAITED RETURN IN DOCTOR WHO