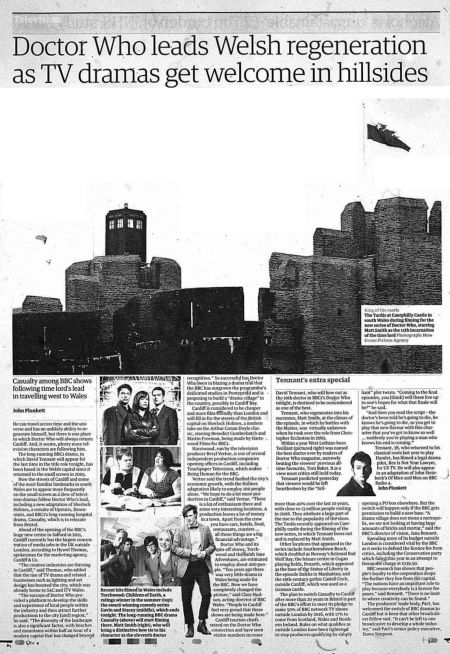 He can travel across time and the universe and has an unlikely ability to regenerate himself, but there is one place to which Doctor Who will always return: Cardiff. And, it seems, plenty more television characters are following him.

The long-running BBC1 drama, in which David Tennant will appear for the last time in the title role tonight, has been based in the Welsh capital since it returned to the small screen in 2005.

Now the streets of Cardiff and some of the most familiar landmarks in south Wales are to appear more frequently on the small screen as a slew of television dramas follow Doctor Who's lead, including a new adaptation of Sherlock Holmes, a remake of Upstairs, Downstairs, and BBC1's long-running hospital drama, Casualty, which is to relocate from Bristol.

Ahead of the opening of the BBC's huge new centre in Salford in 2011, Cardiff currently has the largest concentration of media jobs in the UK outside London, according to Hywel Thomas, spokesman for the marketing agency, Cardiff & Co.

"The creative industries are thriving in Cardiff," said Thomas, who added that the rise of TV drama and related businesses such as lighting and set design has boosted the city, which was already home to S4C and ITV Wales.

"The success of Doctor Who provided a platform to develop the skills and experience of local people within the industry and then attract further productions to the city (and) region," he said. "The diversity of the landscape is also a significant factor, with beaches and mountains within half an hour of a modern capital that has changed beyond recognition." So successful has Doctor Who been in blazing a drama trail that the BBC has outgrown the programme's dedicated studios in Pontypridd and is proposing to build a "drama village" in the country, possibly in Cardiff Bay.

Cardiff is considered to be cheaper and more film-friendly than London and will fill in for the streets of the British capital on Sherlock Holmes, a modern take on the Arthur Conan Doyle classic, starring Benedict Cumberbatch and Martin Freeman, being made by Hartswood Films for BBC1.

Harstwood, run by the television producer Beryl Vertue, is one of several independent production companies opening offices in Cardiff, including Touchpaper Television, which makes Being Human for the BBC.

Vertue said the trend fuelled the city's economic growth, with the Holmes adaptation likely to employ 100 people alone. "We hope to do a lot more production in Cardiff," said Vertue. "There is a lot of enthusiasm there and some very interesting locations. A production leaves a lot of money in a town. Apart from the crew you have cars, hotels, food, restaurants, couriers ... all those things are a big financial advantage."

Doctor Who and its spin-off shows, Torchwood and the Sarah Jane Adventures, are estimated to employ about 400 people. "Ten years ago there was very little drama in Wales being made for the BBC. Now we have completely changed the picture," said Clare Hudson, acting director of BBC Wales. "People in Cardiff feel very proud that these shows are being made here."

Cardiff tourism chiefs seized on the Doctor Who connection and have seen visitor numbers increase more than 40% over the last 10 years, with close to 13 million people visiting in 2008. They attribute a large part of the rise to the popularity of the show. The Tardis recently appeared on Caerphilly castle during the filming of the new series, in which Tennant bows out and is replaced by Matt Smith.

Other locations that appeared in the series include Southerndown Beach, which doubled as Norway's fictional Bad Wolf Bay; the leisure centre in Cogan playing fields, Penarth, which appeared as the base of the Statue of Liberty in the episode Daleks in Manhattan; and the 19th-century gothic Castell Coch, outside Cardiff, which was used as a German castle.

The plan to switch Casualty to Cardiff after more than 20 years in Bristol is part of the BBC's effort to meet its pledge to make 50% of BBC network TV shows outside London by 2016, with 17% to come from Scotland, Wales and Northern Ireland. Rules on what qualifies as outside London have been tightened to stop producers qualifying by simply opening a PO box elsewhere. But the switch will happen only if the BBC gets permission to build a new base. "A drama village does not mean a metropolis, we are not looking at having large amounts of bricks and mortar," said the BBC's director of vision, Jana Bennett.

Spending more of its budget outside London is considered vital by the BBC as it seeks to defend the licence fee from critics, including the Conservative party which failed this year in an attempt to freeze the charge at £139.50.

BBC research has shown that people's loyalty to the corporation drops the further they live from the capital. "The nations have an important role to play because everybody is a licence fee payer," said Bennett. "There is no limit to where creativity can be found."

The producers' trade body, Pact, has welcomed the switch of BBC dramas to Cardiff but is keen that other broadcasters follow suit. "It can't be left to one broadcaster to develop a whole industry," said Pact's senior policy executive, Dawn Simpson.

King of the castle The Tardis at Caerphilly Castle in south Wales during filming for the new series of Doctor Who, starring Matt Smith as the 11th incarnation of the time lord Photograph: Huw Evans Picture Agency

Recent hits filmed in Wales include Torchwood: Children of Earth, a ratings winner in the summer (top); the award-winning comedy series Gavin and Stacey (middle), which ends tonight. The long-running BBC drama

Casualty (above) will start filming there. Matt Smith (right), who will bring a distinctive bow tie to his character as the eleventh doctor