Doctor Who needs a script cure 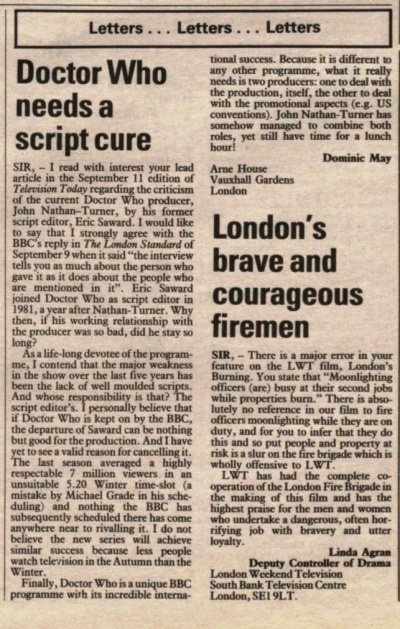 SIR, - I read with interest your lead article in the September 11 edition of Television Today regarding the criticism of the current Doctor Who producer, John Nathan-Turner, by his former script editor, Eric Saward. I would like to say that I strongly agree with the BBC's reply in The London Standard of September 9 when it said "the interview tells you as much about the person who gave it as it does about the people who are mentioned in it". Eric Saward joined Doctor Who as script editor in 1981, a year after Nathan-Turner. Why then, if his working relationship with the producer was so bad, did he stay so long?

As a life-long devotee of the programme, I contend that the major weakness in the show over the last five years has been the lack of well moulded scripts. And whose responsibility is that? The script editor's. I personally believe that if Doctor Who is kept on by the BBC, the departure of Saward can be nothing but good for the production. And I have yet to see a valid reason for cancelling it. The last season averaged a highly respectable 7 million viewers in an unsuitable 5.20 Winter time-slot (a mistake by Michael Grade in his scheduling) and nothing the BBC has subsequently scheduled there has come anywhere near to rivalling it. I do not believe the new series will achieve similar success because less people watch television in the Autumn than the Winter.

Finally, Doctor Who is a unique BBC programme with its incredible international success. Because it is different to any other programme, what it really needs is two producers: one to deal with the production, itself, the other to deal with the promotional aspects (e.g. US conventions). John Nathan-Turner has somehow managed to combine both roles, yet still have time for a lunch hour!