Doctor Who returns, and it's deadly serious 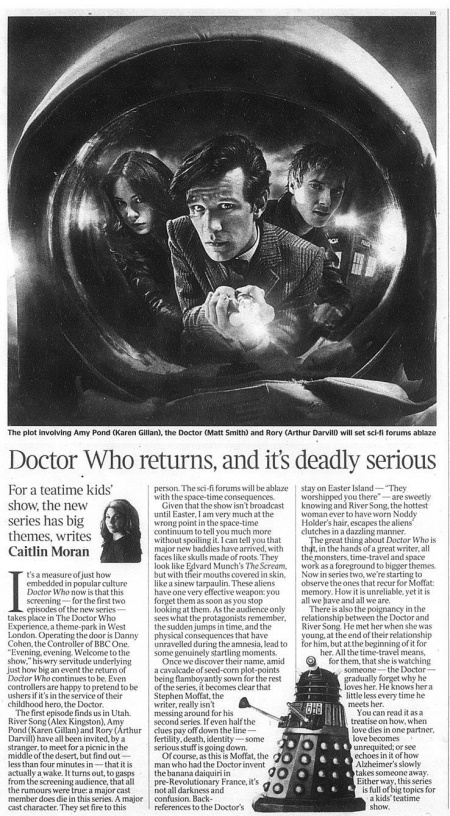 It's a measure of just how embedded in popular culture Doctor Who now is that this screening — for the first two episodes of the new series—takes place in The Doctor Who Experience, a theme-park in West London. Operating the door is Danny Cohen, the Controller of BBC One. "Evening, evening. Welcome to the show," his-wry servitude underlying just how big an event the return of Doctor Who continues to be. Even controllers are happy to pretend to be ushers if it's in the service of their childhood hero, the Doctor.

The first episode finds us in Utah. River Song (Alex Kingston), Amy Pond (Karen Gillan) and Rory (Arthur Darvill) have all been invited, by a stranger, to meet for a picnic in the middle of the desert, but find out —less than four minutes in — that it is actually awake. It turns out, to gasps from the screening audience, that all the rumours were true: a major cast member does die in this series. A major cast character. They set fire to this person. The sci-fi forums will be ablaze with the space-time consequences.

Given that the show isn't broadcast until Easter, I am very much at the wrong point in the space-time continuum to tell you much more without spoiling it. I can tell you that major new baddies have arrived, with faces like skulls made of roots. They look like Edvard Munch's The Scream, but with their mouths covered in skin, like a sinew tarpaulin. These aliens have one very effective weapon: you forget them as soon as you stop looking at them. As the audience only sees what the protagonists remember, the sudden jumps in time, and the physical consequences that have unravelled during the amnesia, lead to some genuinely startling moments.

Once we discover their name, amid a cavalcade of seed-corn plot-points being flamboyantly sown for the rest of the series, it becomes clear that Stephen Moffat, the writer, really isn't messing around for his second series. If even half the clues pay off down the line —fertility, death, identity — some serious stuff is going down.

Of course, as this is Moffat, the man who had the Doctor invent the banana daiquiri in pre-Revolutionary France, it's not all darkness and confusion. Back-references to the Doctor's stay on Easter Island — "They worshipped you there" — are sweetly knowing and River Song, the hottest woman ever to have worn Noddy Holder's hair, escapes the aliens' clutches in a dazzling manner.

The great thing about Doctor Who is that, in the hands of a great writer, all the monsters, time-travel and space work as a foreground to bigger themes. Now in series two, we're starting to observe the ones that recur for Moffat: memory. How it is unreliable, yet it is all we have and all we are.

There is also the poignancy in the relationship between the Doctor and River Song. He met her when she was young, at the end of their relationship for him, but at the beginning of it for her. All the time-travel means, for them, that she is watching someone — the Doctor—gradually forget why he loves her. He knows her a little less every time he meets her.

You can read it as a treatise on how, when love dies in one partner, love becomes unrequited; or see echoes in it of how Alzheimer's slowly takes someone away. Either way, this series is full of big topics for a kids' teatime show.