Doctor Who returns to Earth 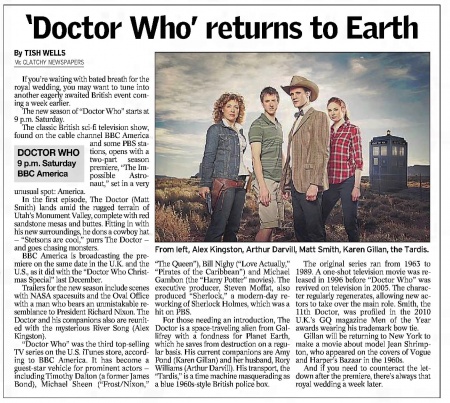 If you're waiting with bated breath for the royal wedding, you may want to tune into another eagerly awaited British event coming a week earlier.

The new season of "Doctor Who" starts at 9 p.m. Saturday.

The classic British sci-fi television show, found on the cable channel BBC America and some PBS stations, opens with a two-part season premiere, "The Impossible Astronaut," set in a very unusual spot: America.

In the first episode, The Doctor (Matt Smith) lands amid the rugged terrain of Utah's Monument Valley, complete with red sandstone mesas and buttes. Fitting in with his new surroundings, he dons a cowboy hat — "Stetsons are cool," purrs The Doctor — and goes chasing monsters.

BBC America is broadcasting the premiere on the same date in the U.K. and the U.S., as it did with the "Doctor Who Christmas Special" last December.

Trailers for the new season include scenes with NASA spacesuits and the Oval Office with a man who bears an unmistakable resemblance to President Richard Nixon. The Doctor and his companions also are reunited with the mysterious River Song (Alex Kingston).

"Doctor Who" was the third top-selling TV series on the U.S. iTunes store, according to BBC America. It has become a guest-star vehicle for prominent actors —including Timothy Dalton (a former James Bond), Michael Sheen ("Frost/Nixon," From left, Alex Kingston, Arthur Darvill

"The Queen"), Bill Nighy ("Love Actually," "Pirates of the Caribbean") and Michael Gambon (the "Harry Potter" movies). The executive producer, Steven Moffat, also produced "Sherlock," a modern-day reworking of Sherlock Holmes, which was a hit on PBS.

For those needing an introduction, The Doctor is a space-traveling alien from Gallifrey with a fondness for Planet Earth, which he saves from destruction on a regular basis. His current companions are Amy Pond (Karen Gillan) and her husband, Rory Williams (Arthur Darvill). His transport, the "Tardis," is a time machine masquerading as a blue 1960s-style British police box. , Matt Smith, Karen Gillan, the Tardis.

The original series ran from 1963 to 1989. A one-shot television movie was released in 1996 before "Doctor Who" was revived on television in 2005. The character regularly regenerates, allowing new actors to take over the main role. Smith, the 11th Doctor, was profiled in the 2010 U.K.'s GQ magazine Men of the Year awards wearing his trademark bow tie.

Gillan will be returning to New York to make a movie about model Jean Shrimp-ton, who appeared on the covers of Vogue and Harper's Bazaar in the 1960s.

And if you need to counteract the letdown after the premiere, there's always that royal wedding a week later.