Doctor Who should feel like it is for everyone, it shouldn't exclude anyone 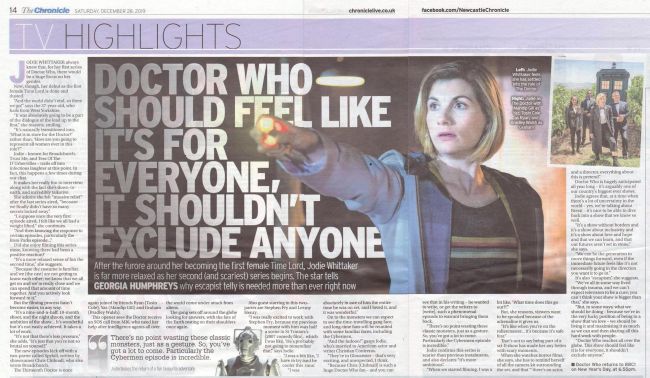 After the furore around her becoming the first female Time Lord,, Jodie Whittaker is far more relaxed as her second (and scariest) series begins. The star tells GEORGIA HUMPHREYS why escapist telly is needed more than ever right now

JODIE WHITTAKER always knew that, for her first series of Doctor Who, there would be a huge focus on her gender.

Now, though, her debut as the first female Time Lord is done and dusted.

"And the world didn't end, so there we go!" says the 37-year-old, who hails from West Yorkshire.

"It was absolutely going to be a part of the dialogue of the lead up to the first," she reasons, smiling.

"It's naturally transitioned into, 'What is in store for the Doctor?' rather than, 'How are you going to represent all women ever in this role?"

Jodie - known for Broadchurch, Trust Me, and Tess Of The D'Urbervilles - trails off into infectious laughter at this point. In fact, this happens a few times during our chat.

It makes her really fun to interview; along with the fact she's down-to-earth, and incredibly talkative.

She admits she felt "massive relief" after the last series aired, "because we finally didn't have so many secrets locked away':

"I suppose once the very first episode aired, I felt like we all had a weight lifted," she continues.

"And then knowing the response to certain episodes, particularly the Rosa Parks episode..."

Did she enjoy filming this series more, knowing there had been a positive reaction?

"It's a more relaxed sense of fun the second time," she suggests.

"Because the costume is familiar, and we [the cast] are not getting to know each other; we know that we all get on and we're really close and we can spend that amount of time together. And you actively look forward to it:'

But the filming process hasn't become easier, in any way.

"It's a nine-and-a-half, 10-month shoot, and the night shoots, and the ambition of the show... It's wonderful but it's not easily achieved. It takes a lot of work.

"It's not that there's less pressure," she adds, "it's just that you're not so brutal on yourself!"

The new episodes kick off with a two-parter called Spyfall, written by showrunner Chris Chibnall, who also wrote Broadchurch.

The Thirteenth Doctor is once again joined by friends Ryan (Tosin . the world come under attack from Cole), Yaz (Mandip Gill) and Graham (Bradley Walsh).

This opener sees the Doctor receive an SOS call from MI6, who need her help after intelligence agents all over the world come under attack from aliens.

The gang sets off around the globe looking for answers, with the fate of the Earth resting on their shoulders once again.

Also guest starring in this two-parter are Stephen Fry and Lenny Henry.

"I was really excited to work with Stephen Fry, because my previous moment with him was half a scene in St Triniam's [2007 comedy film], which I was like, 'He's probably not going to remember that," says Jodie.

"I was a bin like, 'I have to try and be cooler this time.

"I was absolutely in awe of him the entire time he was on set, and I loved it, and it was wonderful."

On to the monsters we can expect to see the time-travelling gang face, and long-time fans will be reunited with some familiar faces, including the Cybermen.

"And the Judoon!" gasps Jodie, who's married to American actor and writer Christian Contreras.

"They're in Gloucester - that's very exciting, and unexpected, I think.

"Because Chris [Chibnall] is such a huge Doctor Who fan - and you can see that in his writing - he wanted to write, or get the writers to [write], such a phenomenal episode to warrant bringing them back.

"There's no point wasting these classic monsters, just as a gesture. So, you've got a lot to come. Particularly the Cybermen episode is incredible:'

Jodie confirms this series is scarier than previous instalments, and also declares "it's more ambitious':

"When we started filming, I was a bit like, 'What time does this go out?!"

But, she reasons, viewers want to be spooked because of the adrenaline it gives us.

"It's like when you're on the rollercoaster... it's because it's safe fear:'

That's not to say being part of a sci-fi show has made her any better with scary moments.

When she watches horror films, she says, she has to remind herself of all the camera kit surrounding the set, and that "'there's an actor, and a director, everything about this is pretend'

Doctor Who is hugely anticipated all year long - it's arguably one of our country's biggest ever shows.

Jodie agrees that, at a time when there's a lot of uncertainty in the world - yes, we're talking about 13rexit - it's nice to be able to dive back into a show that we know so well.

"We can be the generation to move things forward, even if the immediate future feels like it's not necessarily going in the direction you want it to go in."

It's also "escapism' she suggests.

"We've all in some way lived through trauma, and we can't expect television to be a cure; you can't think your show is bigger than that," she says.

"But, in some ways, what we should be doing - because we're in the very lucky position of being in a show that we love - we should be living it and maximising it as much as we can and then sharing all this hard work with people.

"Doctor Who reaches all over the globe. This show should feel like it is for everyone, it shouldn't exclude anyone."

There's no point wasting these classic monsters, just as a gesture. So, you've got a lot to come. Particularly the Cybermen episode is incredible.

Jodie teases the return of a fan favourite adversary

Caption: Left: Jodie Whittaker feels she has settled into the role of The Doctor

Caption: Right: Jodie as The Doctor with Mandip Gill as Yaz, Tosin Cole as Ryan, and Bradley Walsh as Graham