Doctor Who shows off its best 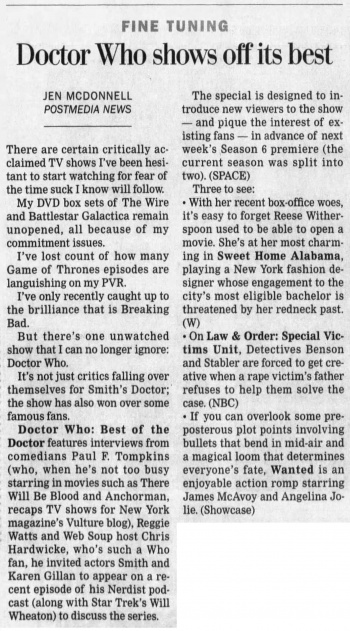 There are certain critically acclaimed TV shows I've been hesitant to start watching for fear of the time suck I know will follow.

My DVD box sets of The Wire and Battlestar Galactica remain unopened, all because of my commitment issues.

I've lost count of how many Game of Thrones episodes are languishing on my PVR.

I've only recently caught up to the brilliance that is Breaking Bad.

But there's one unwatched show that I can no longer ignore: Doctor Who.

It's not just critics falling over themselves for Smith's Doctor; the show has also won over some famous fans.

Doctor Who: Best of the Doctor features interviews from comedians Paul F. Tompkins (who, when he's not too busy starring in movies such as There Will Be Blood and Anchorman, recaps TV shows for New York magazine's Vulture blog), Reggie Watts and Web Soup host Chris Hardwicke, who's such a Who fan, he invited actors Smith and Karen Gillan to appear on a recent episode of his Nerdist pod-cast (along with Star Trek's Will Wheaton) to discuss the series.

The special is designed to introduce new viewers to the show — and pique the interest of existing fans — in advance of next week's Season 6 premiere (the current season was split into two). (SPACE)