Doctor in the house! 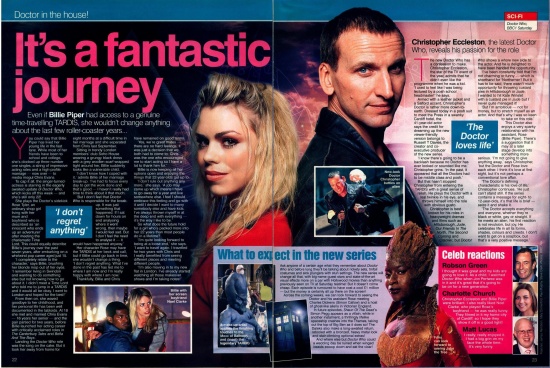 Even if Billie Piper had access to a genuine time-travelling TARDIS, she wouldn't change anything about the last few roller-coaster years...

You could say that Billie Piper has lived her young life in the fast lane. While most of her friends have been to school and college, she's clocked up three number one singles, a string of impressive acting roles and a high-profile marriage — now over to media mogul Chris Evans.

To cap it all, the singer-turned-actress is starring in the eagerly awaited update of Doctor Who, which kicks off this week — and she's still only 22!

She plays the Doctor's sidekick Rose Tyler, an ordinary shop girl living with her mum and boyfriend who is described as 'an innocent who ends up an adventurer' after meeting the charismatic Time Lord. This could equally describe Billie's journey over the past seven years, after embarking on a whirlwind pop career aged just 15.

'I completely relate to the character.' says Billie, brushing her blonde mop out of her eyes. 'I remember living in Swindon and wanting to do something else but not knowing how to go about it. I didn't meet a Time Lord who told me to jump in a TARDIS and it would all be okay. I went to London and hoped for the best!'

From then on, she waved goodbye to her childhood, and her personal life has been well documented in the tabloids. At 18 she met and married Chris Evans — 16 years her senior — and the pair partied for two years, before Billie launched her acting career with critically acclaimed roles in The Canterbury Tales and Bella And The Boys.

Landing the Doctor Who role was the icing on the cake. But it took her away from home for eight months at a difficult time in her marriage and she separated from Chris last September.

'I don't know how I coped with it,' admits Billie of her marriage break-up. 'I've had to focus every day to get the work done and that's good — I haven't really had time to think about it that much.

'But I don't feel that Doctor Who is responsible for the breakup. It was just something that happened. If I sat down for hours on end analyzing where it went wrong, then maybe I would feel sad. But I don't feel the need to analyse it — it would have happened anyway.'

Her character Rose may have the TARDIS at her beck and call, but if Billie could go back in time, she wouldn't change a thing. 'I don't regret anything. What I've done in the past has led me to where I am now and I'm really happy with where I am now.'

Thankfully, Billie and Chris have remained on good terms. 'Yes, we're great mates there are no hard feelings, it was just a decision that we both had to come to. Chris was the one who encouraged me to start acting so I have a lot to thank him for.'

Billie is now keeping all her options open and enjoying the things that 22-year-olds get up to.

'I don't rule out anything any more,' she says. 'A job may come up which means I have to go away for a year and live somewhere else. I feel I should embrace this feeling and go with it until I decide I want to marry somebody else and have kids. I've always thrown myself in at the deep end with everything —it's the way I like to be.'

So what does the future hold for a girl who's packed more into her 22 years than most people do in a lifetime?

'I'm quite looking forward to being at a loose end,' she says. 'I want to travel again. I travelled for two years with Chris and I really benefited from seeing different places and meeting different people.

'I'm also moving in to my new flat in London. I've already started watching all those makeover shows and I'm taking notes!'

Christopher Eccleston, the latest Doctor Who, reveals his passion for the role

The new Doctor Who has a confession to make. Christopher Eccleston, the star of the TV event of the year, admits that he didn't even like the programme when he was a kid. 'I used to feel like I was being lectured by a posh school headmaster!' he says.

Armed with a leather jacket and a Salford accent, Christopher's Doctor is rather more down-to-earth. Dressed today in a posh suit to meet the Press in a swanky Cardiff hotel, the

41-year-old actor says the credit for dreaming up the new viewer-friendly version belongs to Russell T Davies, the creator and co-executive producer of the new series.

'I know there's going to be a backlash because no Doctor has ever looked or sounded like me,' Christopher grins. 'In the past, it appeared that all the Doctors had to be middle class and posh.'

relish. He plays the Doctor with a real twinkle in his eye, and throws himself into the role with obvious gusto. Christopher is best known for his roles in heavyweight dramas films such as Hillsborough, Jude, Our Friends In The North, The Second Coming and Cracker, but Doctor Who shows a whole new side to the actor. And he is delighted to have been handed the opportunity.

'I've been constantly told that I'm not charming or funny which is shorthand for 'Northerner'! But it has to be said, there wasn't much opportunity for throwing custard pies in Hillsborough or Jude. I wanted to hit Kate Winslet with a custard pie in Jude but I never quite managed it!

'But I'm ambitious - not for money, but to stretch myself as an actor. And that's why I was so keen to take on this role.'

This Doctor also enjoys a very sparky relationship with his assistant, Rose (Billie Piper). There's a suggestion that it may at a later stage develop into something more serious. 'I'm not going to give anything away,' says Christopher, 'but the Doctor and Rose love each other. I think it's love at first sight, but it's not perhaps a conventional love affair.

'The Doctor's defining characteristic is his love of life,' Christopher continues. 'He just can't stand still. If the series contains a message for eightto 12-year-olds, it's that life is brief — seize it and shake it.

'The Doctor accepts everything and everyone, whether they're black or white, gay or straight. If he meets an alien, his first reaction is not revulsion, but joy. He celebrates life in all its forms, shades, colours and creeds. I don't want to get on a soapbox, but that's a very positive message.'

I thought it was great and my kids are going to love it. As a child, I watched Doctor Who when Jon Pertwee was in it and it's great that it's going to be on for a new generation.

Christopher Eccleston and Billie Piper were brilliant. I also really liked Noel Clarke, who played Rose's boyfriend — he was really funny They filmed in it my home city of Cardiff, so I hope they show it off in a good light!

I really, really enjoyed it. I had a big grin on my face the whole time. It's very funny

What to expect in the new series

Caption: A make-up artist applies the finishing touches to the Moxx of Balhoon, and (inset) the legendary TARDIS

Ask anyone of a certain age what they remember about Doctor Who and before long they'll be talking about rickety sets, tinfoil costumes and sink plungers with stun settings. The new series will change all that, with big-name guest stars and state-of-the-art visual effects more on a par with Hollywood movies than anything previously seen on TV at Saturday teatime! But it doesn't come cheap. Each episode is rumoured to have cost a cool £1 million — but the money is certainly all up there on the screen!

Across the coming weeks, we can look forward to seeing the Doctor and his assistant Rose meeting Charles Dickens (Simon Callow) and a host of ghost-like aliens in Victorian England. In future episodes, Shaun Of The Dead's Simon Pegg appears as a villain, while in another instalment, a thrillingly lifelike spaceship crashes into the Thames. taking out the top of Big Ben as it does so! The Daleks also make a long-awaited return, retooled with a bronzed, heavy metal look 'and stair-climbing optional extras!

And where else but Doctor Who could a wedding day be ruined when winged beasts swoop down and eat the vicar!