Doctor in tune with past 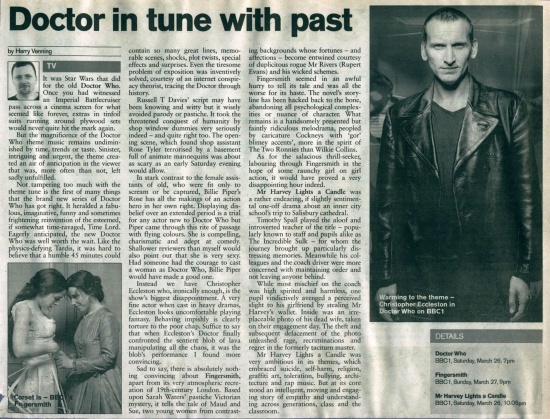 It was Star Wars that did for the old Doctor Who. Once you had witnessed an Imperial Battlecruiser pass across a cinema screen for what seemed like forever, extras in tinfoil suits running around plywood sets would never quite hit the mark again.

But the magnificence of the Doctor Who theme music remains undiminished by time, trends or taste. Sinister, intriguing and urgent, the theme created an air of anticipation in the viewer that was, more often than not, left sadly unfulfilled.

Not tampering too much with the theme tune is the first of many things that the brand new series of Doctor Who has got right. It heralded a fabulous, imaginative, funny and sometimes frightening reinvention of the esteemed, if somewhat time-ravaged, Time Lord. Eagerly anticipated, the new Doctor Who was well worth the wait. Like the physics-defying Tardis, it was hard to believe that a humble 45 minutes could contain so many great lines, memorable scenes, shocks, plot twists, special effects and surprises. Even the tiresome problem' of exposition was inventively solved, courtesy of an internet conspiracy theorist, tracing the Doctor through history.

Russell T Davies' script may have been knowing and witty but it wisely avoided parody or pastiche. It took the threatened conquest of humanity by shop window dummies very seriously indeed — and quite right too. The opening scene, which found shop assistant Rose Tyler terrorised by a basement full of animate mannequins was about as scary as an early Saturday evening would allow.

In stark contrast to the female assistants of old, who were fit only to scream or be captured, Billie Piper's Rose has all the makings of an action hero in her own right. Displaying disbelief over an extended period is a trial for any actor new to Doctor Who but Piper came through this rite of passage with flying colours. She is compelling, charismatic and adept at comedy. Shallower reviewers than myself would also point out that she is very sexy. Had someone had the courage to cast a woman as Doctor Who, Billie Piper would have made a good one.

Instead we have Christopher Eccleston who, ironically enough, is the show's biggest disappointment. A very fine actor when cast in heavy dramas, Eccleston looks uncomfortable playing fantasy. Behaving impishly is clearly torture to the poor chap. Suffice to say that when Eccleston's Doctor finally confronted the sentient blob of lava manipulating all the chaos, it was the blob's performance I found more convincing.