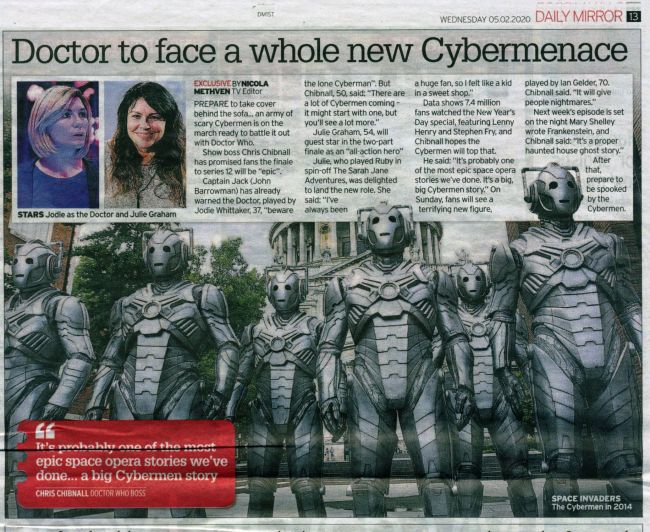 PREPARE to take cover behind the sofa... an army of scary Cybermen is on the march ready to battle it out with Doctor Who.

Show boss Chris Chibnall has promised fans the finale to series 12 will be "epic".

Captain Jack (John Barrowman) has already warned the Doctor, played by Jodie Whittaker, 37, "beware the lone Cyberman". But Chibnall, 50, said: "There are a lot of Cybermen coming it might start with one, but you'll see a lot more."

Julie Graham, 54, will guest star in the two-part finale as an "all-action hero"

Julie, who played Ruby in spin-off The Sarah Jane Adventures, was delighted to land the new role. She

said: "I've always been a huge fan, so I felt like a kid in a sweet shop."

He said: "It's probably one of the most epic space opera stories we've done. It's a big, t big Cybermen story." On Sunday, fans will see a terrifying new figure, played by Ian Gelder, 70. Chibnall said. "It will give people nightmares."

Next week's episode is set on the night Mary Shelley wrote Frankenstein, and Chibnall said: "It's a proper haunted house ghost story."

After that, prepare to be spooked by the Cybermen.

Caption: STARS Jodie as the Doctor and Julie Graham

Caption: SPACE INVADERS The Cybermen in 2014