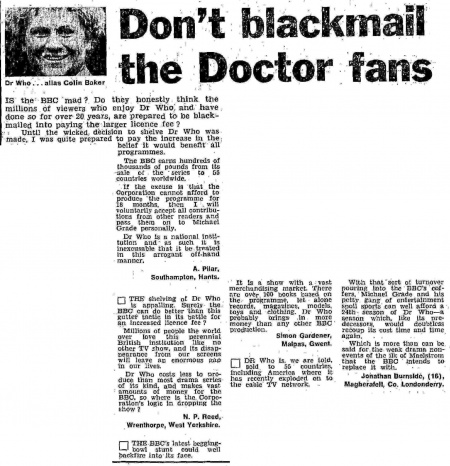 IS the BBC mad? Do they honestly think the millions of viewers who enjoy Dr Who and have done so for over 20 years, are prepared to be black-mailed into paying the-larger licence fee ?

Until the wicked, decision to shelve Dr Who was made, I was quite prepared to pay the increase in the; belief it would benefit all programmes.

The BBC earns hundreds of thousands of pounds from its sale of the series to 55 countries worldwide.

If the excuse is that the Corporation cannot afford to produce the programme for 18 months, then I will voluntarily accept all contributions from other readers and pass them on to Michael Grade personally.

Dr Who is a national institution and - as such it is inexcusable that it be treated In this arrogant off-hand manner.

THE shelving of Dr Who is appalling. Surely the BBC can do better than this gutter tactic in its battle for an increased licence fee ?

Millions of people the world over love this perennial British institution like no other TV show, and its disappearance from our screens will leave an enormous gap in our lives.

Dr Who costs less to produce than most drama series of its kind, and makes vast amounts of money for the BBC, so where is the. Corporation's logic in dropping the show ?

THE BBC's latest begging-bowl stunt could well backfire into its face.

It is a show with a vast merchandising market. There are over 100 books based on the programme, let alone records, magazines, models, toys and clothing. Dr Who probably brings in more money than any other BBC production.

DR Who is, we are told, is sold to 55 countries, including America where it has recently exploded on to the cable TV network.

With that "sort of turnover pouring into the BBC's coffers, Michael Grade and his petty gang of entertainment spoil sports can well afford a 24th season of Dr Who—a season which, like its predecessors, would doubtless recoup its cost time and time, again.

Which is more than can be, said for, the weak drama nonevents of the ilk of Maelstrom that the BBC intends to replace it with.