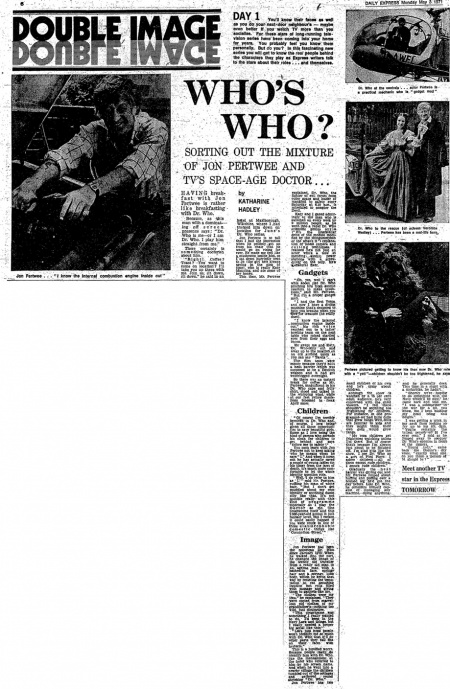 You'll know their faces as well as you do your next-door neighbours -- maybe even better if you watch TV more than you socialise. For these stars of long-running television series have been coming into your home for years. You probably feel you know them personally. But do you? In this fascinating new series you will get to know the real people behind the characters they play as Express readers talk to the stars about their roles and themselves.

Sorting out the mixture of Jon Pertwee and TV space age Doctor ...

Having breakfast of Jon Pertwee is rather like breakfasting with Dr. Who.

Because, as this man with a dominating the off screen presence says: "Dr. Who is me-- or I am Dr. Who. I play him straight from me."

There certainly is something doctorish about him.

"Right! Coffee? Toast? You want to come on location? I'll take you up there with me. Join us, sit down, sit down, he said in a hotel at Marlborough, Wiltshire, were I had tracked him down on location for June's Dr. Who series.

Jon Pertwee is so tall that I had the impression when he politely got up from his chair that he would go on rising forever. He made me feel like a mushroom beside him, so I sat down hurriedly next to Jo (the girl he's always saving in the nick of time), who is really Katy Manning and ate some of her honey

This time, Mr. Pertwee explained, Dr. Who, the fighter of evil forces from outer space and leader of mankind to safety every Saturday at 6.10 pm., is scheduled to conquer the Devil.

Katy and I gazed admiringly at the man who is switched on every week by 9 million people, as he went into rapid Dr. who scientific genius style ("It's the interstellar drive of the module modified by the thingummybob of the what's it") explanation of latest camera and cutting techniques. I realized he is not just an actor who's a wow at mending atomic power stations with a screwdriver on the telly. He's a natural fixer.

"I had the first Vespa and now I have a diving machine that's designed to help you breathe when you dive for treasure [he really does].

"I know the internal combustion engine inside out," his rich voice reached out to a lady's bowling team on the next table who Raised startled eyes from their eggs and bacon.

He swept me and Katy, Dr. Who-ishly out and away up to the location on an old airfield quick as you can say "Tardis".

The film team were moody because they'd built a heat barrier which was supposed to be a Devilish weapon and it had got waterlogged overnight.

So there was an instant break for coffee as Mr. Pertwee, magnificent in his Dr. Who cape and frilly shirt, stood and talked in the whipping wind, while at our feet yellow dandelions bloomed and freak April snow.

"Of course I'm terribly involved in Dr. Who and of course, I love being given all those opportunities to save beautiful girls. Same as I love being the kind of person who spreads his cloak for children to get behind and says follow me to safety.'."

You soon learn with Jon Pertwee not to keep asking who he means when he says "I." And when it turns out he was actually saved a couple of young ladies (in his time) from the jaws of death, it's much more comfortable to let the whole identity question ride.

"Well I do refer to him as 'I.'" said Mr. Pertwee, rustling his mass of white hair. "But I don't get muddled about my own identity or anything day and sillier like that. It's not possible really with this kind of programme especially as I play the Doctor as me. The programme itself and this 2,000-year-old genius is just fantasy level. But I reckon it could easily happen if you were stocked in one of those claustrophobic domestic things like 'Coronation Street.'"

Jon Pertwee has been the notorious Dr. Who since January 1970. When he walked into the part he changed the image of the trendy old traveler from a really old man to and an ageless man with a bashed-in face, spingy hair and a springy, lithe body, which he keeps that way by resisting the temptation to eat smashing location hot rolls filled with sausage and giving them to gannets like me.

"The clothes were my idea," he explained. "They were copied from marvelous old close of my grandfather's nothing to wild, just distinctive.

"This programme was something I really wanted to do. I'd been in the Navy Lark and things, but I really needed a proper big serial like this.

Let's just hope people won't identify me so much with Dr. Who that if I do other parts they fall flat on their faces with hysteria."

This is a justified worry. Because people really do identify him with Dr. Who, like the management at the hotel who referred to him by his screen name. And when he went into a nearby village the children tumbled out of their cottages and gather round shrieking "Dr. Who."

Jon Pertwee has two small children of his own and he's crazy about children.

Although the show is watched by a 75 per cent adult audience, he's very concerned with the child viewers. "I feel there shouldn't be anything too frightening for children. For instance in one programme we had little dolls that grew fangs. Well, dolls are familiar to kids and they might think their own dolls would grow fangs.

"My own children get frightened watching unless I'm there. But of course that's because I'm always just about to be finished off. I'm glad kids like the show. I see Dr. Who as a sort of Pied Piper. I adore children all of them except to read children. I smacked rude children."

Gradually the heat barrier was drying out and Mr. Pertwee limped about huffing and puffing over a bruised leg he got the day before. Like Dr. Who, he considers himself capable of managing any machine, and doing anything, and he generally does. This time in a stunt with a motorbike, he hadn't.

"Shortly were hoping to do something with the Navy which'll being nice," he came back and told me. "I was a submariner in the war for a bit, you know, but I kept bashing my head being this heights."

I was getting a crick in my neck from looking so far all to his 6ft. 3½ inch. "You're certainly the tallest person of 51 I've ever seen," I said as he limped away to conquer Dr. Who's enemies in front of the camera.

"Young lady," came back the Doctor's dry voice, "exactly what size do you think a person of 51 should be? "

Dr. Who at the controls actor Pertwee is a practical mechanic who is gadget mad

Dr. Who to the rescue (of the actress Veronica Wadley) ... Pertwee has been a real hero.

Pertwee pictured getting to know is that a new Dr. Who role with a yeti children shouldn't be too frightened, he says